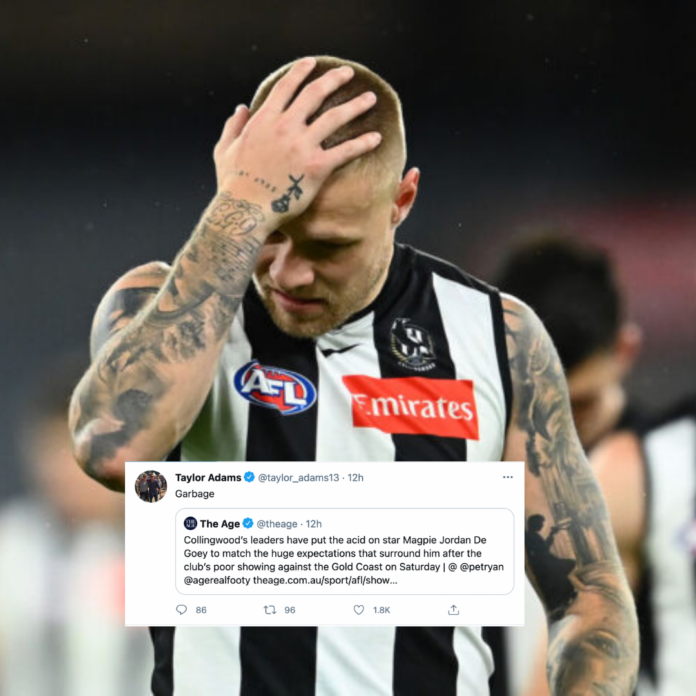 Injured Magpies vice-captain Taylor Adams earlier this week shot down a report by The Age‘s Peter Ryan that senior leaders at the club put heat on Jordan De Goey after a disappointing effort against the Gold Coast on Saturday.

Collingwood slumped to its fifth-straight loss as the Suns ran all over them at the MCG in a 24-point result to continue the Pies’ horror start to the season.

De Goey returned from a one-game absence from concussion and largely underwhelmed, gathering 16 disposals and laying just one tackle in a predominant midfield role.

And according to Ryan’s report on Monday night, Collingwood leaders “put the acid” on De Goey in the aftermath and were “disappointed” he didn’t step up in what was a crucial game for the club.

It is alleged that senior players also took responsibility for the poor performance, but highlighted De Goey not living up to his huge potential, pinpointing his off-ball defensive efforts.

But Adams, who is currently sidelined with an MCL injury, rubbished such claims hours later on social media, labelling the story as “garbage”.

However, Fox Sports’ Tom Morris has backed up Ryan’s report, stating Adams was one of the most vocal leaders demanding more from the group and in particular De Goey.

Morris even revealed that Ryan’s story watered down the fiery details.

“It‘s actually bang on the money if anything, he (author Peter Ryan) probably undersold it, because what happened after the game was significant according to those people in the room,” Morris said on Fox Sports News’ AFL Tonight on Tuesday.

It is believed that De Goey did not argue back and copped the brutal criticism on the chin.

Morris also stated that sources from within the rooms allege that Nathan Buckley during the half time break delivered his ‘strongest spray’ as senior coach in recent times.

“Jordan De Goey didn’t actually argue back but it was quite a fierce spray from Adams in particular,” he said.

“It followed a brutal spray at half-time from Nathan Buckley, people tell me that it was the strongest spray that Nathan Buckley’s given in his time at Collingwood in recent memory. Not that they had an issue with this. I think we all know it was warranted at that moment of the match.“

Speaking about the report on Fox Footy’s On The Couch on Monday night, Demons great Garry Lyon believes it could be the stern message De Goey needs to turn his form around.

“He’s coming off a concussion, he hasn’t played a lot of footy, I’m not making excuses for him. I love reading that, if it’s Pendlebury eyeballing him, ‘Me, you and you have got to step up’,” Lyon said.

Brisbane Lions legend Jonathan Brown declared that De Goey “has got to stand up” and must take on a bigger leadership role.

“I’ve been a fan of De Goey over the journey. But he’s a guy who has got to stand up. Some of his efforts, he looked very lacklustre,” Brown said.

“For a player like this he should be dominating, we spoke about 2018 he’s had a drop off since then. A couple of injuries, but eventually you’ve got to say ‘hey boys, I’m the leader of the team or one of the leaderships of the team’ and play consistently.”

The former Pick 5 has now played 104 AFL games, averaging 16.2 disposals across seven seasons and booting a total of 139 goals.

He has averaged a career-low 12.8 disposals through six games in 2021 and slotted seven majors.