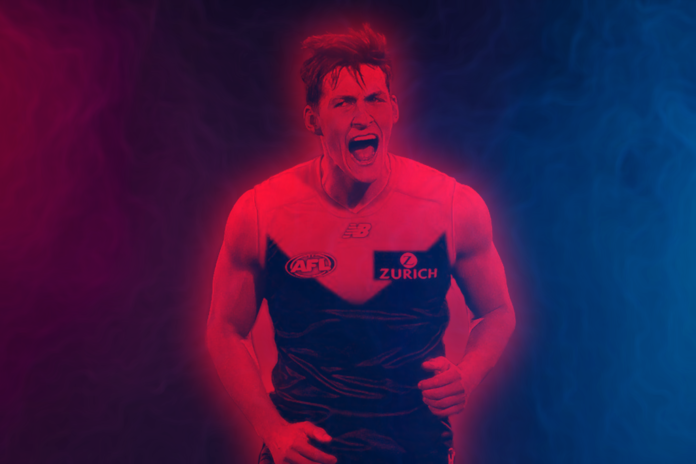 Could out-of-favour Demon Sam Weideman be on the move at season's end?

AFL great Gerard Healy has urged rival clubs to enquire about the availability of the 23-year old forward.

Out-of-contract at the end of the season, Weideman currently finds himself left out of a surging Demons outfit that are undefeated after six rounds.

But Weideman has been on fire in the VFL, booting four goals for Casey on Thursday night to take his tally to 14 majors from three games in the seconds.

SEE ALSO: What is behind the rise of the Dogs and Dees?

Tom McDonald, Luke Jackson, Bailey Fristch and Mitch Brown have all been rewarded for the club's strong start to 2021 and are ahead of Weideman in the pecking order, while boom recruit Ben Brown was named to play first game of the season against North Melbourne on Sunday.

Speaking on 3AW's Sportsday, Healey said rivals have to do their due diligence on Weideman.

“If I’m one of about 15 football managers at football clubs, I’m ringing Sam Weideman’s manager up right now,” Healy said on Sportsday.

“If he is third or fourth in line (at Melbourne), it’s worth asking the question.

“If he’s not playing by mid-season, look out, there will be people coming from everywhere to sign him.”

Furthermore, AFL Media's Nat Edwards and Damian Barrett said on AFL Daily that Collingwood should target Weideman, whose late grandfather Murray is a legend of the club.

Murray Weideman played 180 AFL games for the Magpies, winning a premiership in 1953 and captaining the club to the 1958 flag.

"I love that idea you've just raised there for the Pies to go and get him, particularly with that surname," Barrett said.

Weideman was drafted to the Demons wth Pick 9 in the 2015 AFL draft and has played 44 AFL games over five seasons, booting 46 goals.

As he does not yet qualify for free agency, Weideman would need to be acquired via trade.