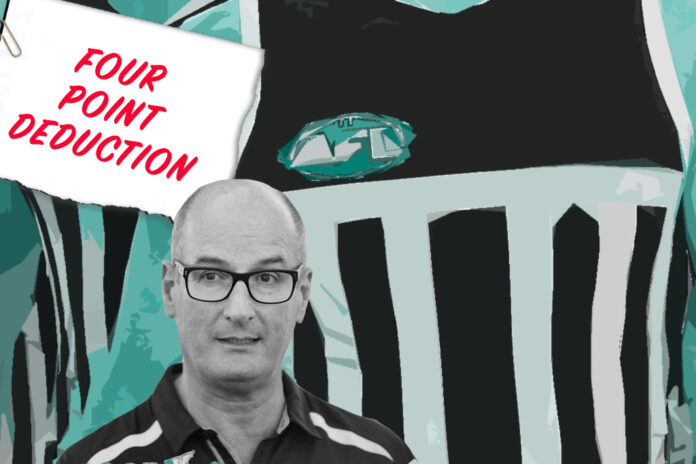 And Port Adelaide chairman David Koch is "absolutely ropeable", alleging the club was tricked by Collingwood and former president Eddie McGuiure into signing an agreement in 2007 that meant the Power could only wear the black and white stripes during in the AFL's heritage round - which ceased to exist in 2008.

Koch revealed on FIVEaa Breakfast on Thursday morning that the AFL has threatened to deduct the club premiership points if they wear the Prison Bar jumper in next week's Showdown against the Crows.

AFL will deduct Port Adelaide four premiership points if they wear the prison bars in the Showdown.

“It’ll cost me points. I did ask that," Koch declared.

"I said ‘I’m happy to pay a fine, I’ll just bloody wear the thing’. They said ‘we’ll fine you and take points off you’ … it would be four points for the game. We can’t afford (to do that).”

Port Adelaide were allowed to wear the jumper in their 150th anniversary season in 2020, and according to Koch, part of the agreement was to to “continue the conversation to wear the Prison Bar guernsey ongoing”.

It comes after the Port Adelaide chairman issued a statement on Wednesday night, explaining that the club was yet to hear back from the AFL over whether or not they could wear the Prison Bar jumper against Adelaide.

And while Eddie McGuire may be gone from Collingwood, new president Mark Korda is as bold as his predecessor on the issue.

Korda released a statement just hours after Koch's plea on Wednesday night, saying “there is a place for only one black and white striped jumper in the AFL, the iconic Collingwood jumper.

“In the spirit of AFL collegiality and in recognition of Port Adelaide’s rich South Australian history Collingwood supported the AFL’s decision to allow Port Adelaide to wear a black and white striped jumper in 2020, Port Adelaide 150th year.

“We are surprised and disappointed there is a renewed attempt to introduce the jumper to the competition on a permanent basis, particularly given what we believe to be in agreement was reached between the two clubs a number of years ago.” 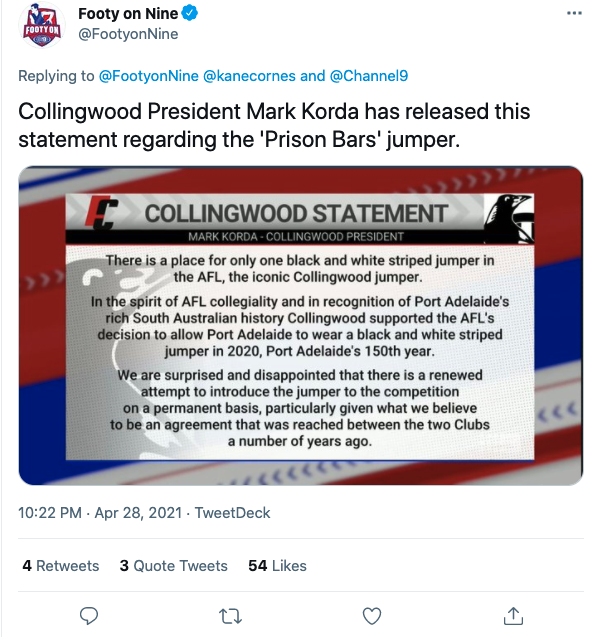 RELATED: Nathan Buckley wants to stay on as Collingwood coach in 2022

Cornes argued that Port Adelaide should be able to celebrate their South Australian heritage twice a year in Showdowns, saying it is special for fans.

He highlighted the signed Heritage Round agreement, saying Collingwood can't have known the annual round was going to be abolished.

However, the former Collingwood president maintained that Port Adelaide took lucrative amounts of money to strip away from the black and white for their new teal look, and thus should not be allowed to return to their heritage as they please.

Watch the fiery exchange in the video below!

"Why were you comfortable with Port Adelaide wearing it once a year back in 2007 and now you're not?"@kanecornes has revealed the contract that Eddie McGuire signed to stipulate the rules surrounding the 'Prison Bars'#9FootyClassified | Watch @channel9 pic.twitter.com/c3KrdZObIo

Responding to McGuire's comments, Koch said he had reached out to ex-Power chief John James, who signed the 2007 document on behalf of the club.

However, Koch alleges that James wasn't aware that Heritage Round would be axed, calling out the AFL for being bias towards Victorian clubs and labelling the situation as ‘insider trading’.

“We had no knowledge of that and that is a reflection of this VFL Melbourne market that pat the interstate clubs on the head and pay them a bit of attention but say: ‘Get away this is our game,’” Koch said on FIVEaa Breakfast.

“They’ve got to understand there’s no ‘V’ in AFL anymore and every club has got to be respected and treated the same. In my finance world, that would be called ‘insider trading’.

“So this agreement was signed by a president of a club who had inside knowledge that the other parties were not aware of – it begs the question whether the AFL were aware of it – and completely against the spirit of the undertaking. That just infuriates me more after that comment last night. I’m absolutely ropeable that we could be hoodwinked like this.”