PORT$2.75
ZERO HANGERAustralia's #1 independent AFL news source
More
Home AFL News 2022 What is behind the rise of the Dogs and Dees? 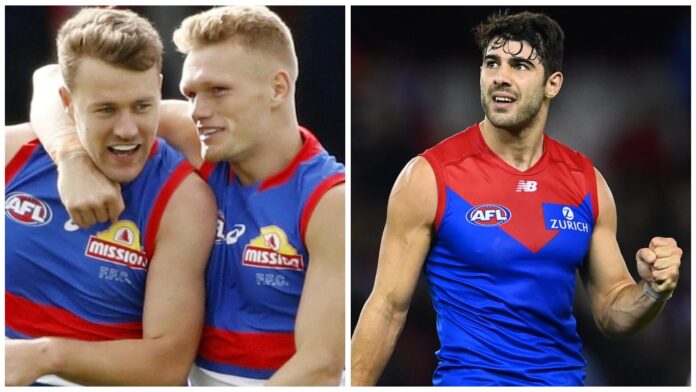 The Western Bulldogs and Melbourne will be pinching themselves at the moment.

6-0 and looking the real deal, there are 16 clubs incredibly envious of the undefeated duo, but how have the got there?

The Dogs seemingly always had the pieces at their disposal and it was just about whether they could get all the gears to click at the right time.

Melbourne have been a more of a shock rise in 2021, after making a preliminary final in 2018 the Dees finished 17th in 2019 and were a middle-of-the-road team last year.

But now they look untouchable at their best, they faced and passed a stern Richmond test last week and they are being led by their stars.

Embed from Getty ImagesBoth teams have one clear area of dominance at the moment and that's their midfield groups, both batting incredibly deep.

The Dogs are led by skipper Marcus Bontempelli who is supported by the likes of Tom Liberatore, Josh Dunkley, Jack Macrae, Adam Treloar and Bailey Smith.

It is borderline impossible to stop them all.

Melbourne boast a fair line-up of their own with Christian Petracca and Clayton Oliver leading the way.

Add in Angus Brayshaw, Ed Langdon and Jack Viney who are getting silver service from Max Gawn's 32 hitouts per game.

The Dogs and Demons have turned to their midfield in a bid to secure the ball first and build from there. Last year the Dogs were 10th in the league for clearances and the Demons were 15th, averaging just 28 a game.

Simon Goodwin's men have turned that right around, now averaging 37 a game (6th most) and the Dogs have become the game's best clearance team averaging over 40 a game.

The Bulldogs are immediately putting opposition defences under pressure and are getting 58 inside 50's per match.

Melbourne have not struggled to get the ball inside 50 in recent years but have again taken it to another level ranking 1st for attacking entries. The Demons go inside their forward line no les then 60 times per game.

The new rules for the 2021 season have made scoring a priority and these two sides have figured out how to hit the scoreboard in a major way. The Dogs are the game's highest scoring team while the Dees rank 5th.

One stat that does separate the two teams is their tackle numbers. The Demons are hunters and come at the opposition hard without the ball, ranking as the 3rd best tacklers in the game while the Dogs rank as 10th.

The Bulldogs average 56 tackles per game as they do their damage with ball in hand. Luke Beveridge's side turn the ball over the least in the competition and with ball users like Macrae and Bontempelli, you can see why.

Macrae has started the year in Brownlow form and is averaging 36 disposals per game, leading the competition for possessions.

Ball use has been the standout area of his game in 2021, while Oliver and Petracca are 3rd and 9th respectively, with Dunkley in 7th with 30 disposals per game.

Despite the Dogs' lack of genuine tackle pressure they still manage to intercept the ball in defence at an elite level.

Intercept marking has long been a trait of the best teams in the league and Alex Keath is the AFL's 7th best interceptor with 49 already this season.

Jake Lever and Steven May have become one of the game's best defensive duos in 2021, with Lever showing why the Dees got him in on such big money.

The former Crows defender is the No.1 intercept defender in the game at the moment, averaging 11 per game over the first six weeks.

So even when the Demons lose a clearance they are generally pretty durable at pressuring the ball and winning it back quickly and have tended to score well off turnovers so far this season.

Both teams possess genuine game-winners, Bontempelli and Petracca are the type of players you can turn to when the game is on the line.

The All-Australian duo impact the scoreboard and can win the ball on the inside and outside. The duo who are heavily in Brownlow contention and are averaging 1.3 goals a game and while Petracca has got more of the footy so far 'The Bont' is ahead in goal assists with 1.2 a game.

That means Bontempelli is having a direct hand in 2.5 goals per game from midfield, a priceless number.

Both teams are playing a style that will win finals as well. Winning the ball at the stoppage and gaining territory is key in tight finals and both teams are great exponents of this.

They both win the ball back well and punish their opposition when they make mistakes.

We can't forget that this may not be the full Melbourne profile yet, as they are still to introduce Ben Brown into the senior side while Sam Weideman has been ripping apart the VFL over recent weeks.

Both teams are set to meet in Round 11 with the potential of them both being undefeated a live possibility. The Demons face North Melbourne, Sydney, Carlton and Adelaide across their next month, likely heading into each clash as clear favourites.

The Bulldogs face Richmond, Carlton, Port Adelaide and St Kilda over the same spell and will have their premiership credentials tested.