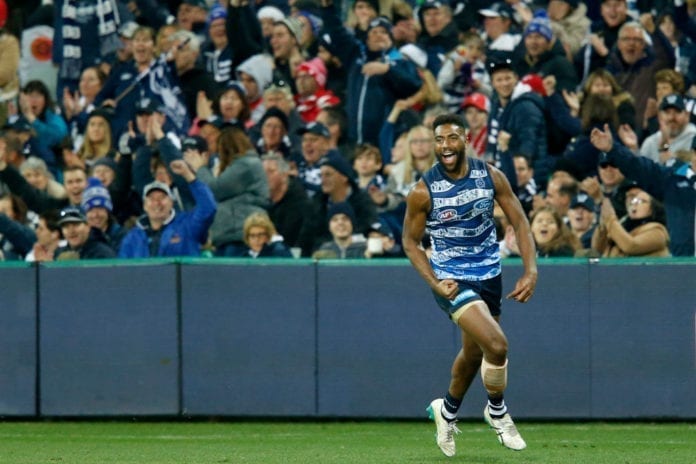 Mackie's backing of the forward-cum-ruck comes after Ratugolea managed just four senior appearances in 2022 - his smallest seasonal return on record.

The triple premiership player turned recruitment chief spoke openly on the 24-year-old's future ahead of the opening day of the AFL Trade Period at Marvel Stadium.

“We love Esava. He's had some conversations (with rival clubs), such is the AFL world, but he's contracted, and we love him," Mackie said.

“Esava will be staying with the Cats.”

Despite claiming the club's 10th cup less than a fortnight ago following an 81-point rout of the Swans, Mackie contented that he and his team of wheelers and dealers would have their hands full seeking to improve on near perfection.

Off the litany of names that have been linked with rival clubs, the Cats are said to have strong ties with talented Sun Jack Bowes, wantaway Pie Oliver Henry and fresh-faced Giant Tanner Bruhn.

Though luring Bowes to the Pivot City comes with the added maraschino of Pick 7 in a trade package, Mackie stressed that Geelong held an interest in the 24-year-old's skillset, stating that an old mate with a good eye had provided him with some even better oil.

“He's a ripping kid we feel like will be a great fit for us. Hopefully, in the next couple of days we'll know more, but we've been interested in Jack for a long time," the 38-year-old added.

“We've known about him for a long time, clearly since his draft year. We had some good intel off Gary Ablett when he came back. You track guys who are playing and getting some experience in their AFL side, and he's one of them."

With both Bruhn and Henry having roots in the region, as well as expressing a collective desire to return, Mackie claimed this reality was exciting for the club, however, no guarantee could be made.

“We're excited by the fact that Tanner would like to come (to Geelong). We're continuing to talk to Jason and the Giants," he said.

For Henry, while the prospect of playing in the same side as his older brother, Jack, appears set to become a reality, it remained too soon to know exactly where his magnet would lie on Chris Scott's whiteboard.

“We've been really clear that there's no guarantees,” Mackie claimed.

“He's obviously a talented player, but as far as the talk around the team (for) next year (goes), it's a bit premature for that. Ollie knows that. We've had conversations around that.”

Having farewelled legendary skipper Joel Selwood, Mackie was unwilling to suggest which new fish was in line to begin filling the superstar's void.

“It depends how these trades go,” Mackie offered through a chuckle.

“We've got a number of options, but we'll see how the next 10 days go, because it could be anyone one of them.”

However, should Pick 7 be wrangled from the Suns via a deal for Bowes, Geelong remains odds on the select local lad Jyhe Clark with the pick - a youngster that has already been likened to the hard-nosed retiree.

Though talisman Tom Hawkins will be back to lead the Cats' offensive line in 2023, the 34-year-old's former teammate professed that plans were already in place to begin filling his boots.

“It started probably five years ago, but he keeps rolling around, to his credit," Mackie said of the operation to eventually replace Hawkins.

“Hawk's been amazing. It's something at the front of our mind. We've got some stuff we're going to need to attend to (and) we can't do it all at once. We think we've got some flexibility in our team and some guys that are developing well within our system.

“Nobody will replace Hawk, but whatever that looks like, we'll see how we go.”