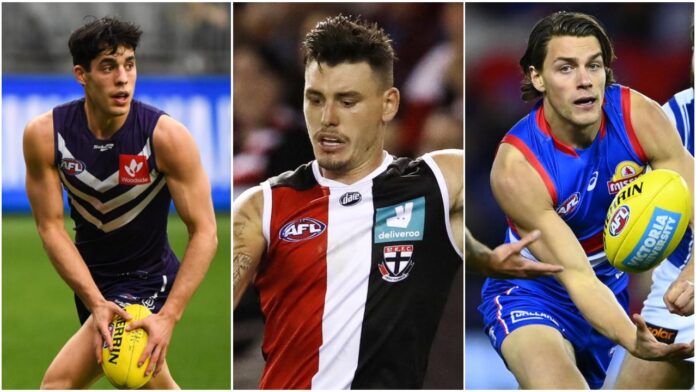 It was another frantic week in the AFL trade circles, with the home and away season officially coming to a close and clubs beginning to re-shape their lists for 2022.

The Dockers, Hawks and Magpies were among the mix of clubs linked to rival players in the past week in what has been a busy period of trade and free agency news and rumours.

Fremantle midfielder Adam Cerra is understood to have requested a trade from the Dockers, per multiple reports.

The 21-year-old has long been linked to a return to Victoria, with those reports now looking to come to fruition.

A star of the Dockers' midfield, Cerra has been closely linked with a move to Carlton, while the Tigers, Hawks and Bombers have all shown previous interest.

The revelation made was that the Giants should trade their out-of-favour captain Stephen Coniglio back home to WA.

Collingwood defender Brayden Maynard appears to be a focus of the Adelaide Crows' off-season radar as there appears to be serious interest in picking up the Magpie over the coming 12 months, as per 9 News Adelaide.

While Maynard has another year to serve under his current deal, he has refused to sign any form of extension until Collingwood announce their new coach. The star defender has made it clear to the club that he prefers to stay put, despite speculation earlier in the year indicating that he would demand a trade at season's end.

Ex-Docker urges club to “sell the shop” for Rising Star

Former Fremantle midfielder Paul Hasleby believes Demons tall Luke Jackson will be "the marquee player of the competition" in a matter of years, suggesting his former side do what they can to lure the teenager back to his home state.

Jackson has flourished for Melbourne this season, emerging as a key component to the minor premiers' successful campaign to date.

Collingwood skipper Scott Pendlebury has extinguished recent rumours that he could be on the move with a post on social media on Tuesday morning.

Pendlebury, who remains uncontracted beyond 2021, stated his commitment to the club in a brief tweet.

"Sorry for any confusion. Just to clear it up- I want to be a one club player and finish my playing career at Collingwood," the tweet read.

George Hewett is still yet to sign on for a deal beyond 2021 and negotiations haven't progressed at all in recent times according to Swans CEO Tom Harley.

The 25-year-old South Australian is an integral part of the Sydney setup and will become a restricted free agent in trade period 2021 should he not sign on before then.

Interest from Carlton and Collingwood is set to play in the mind of Western Bulldogs midfielder Patrick Lipinski as he weighs up a contract extension tabled by the Dogs.

According to AFL.com.au's Cal Twomey, Lipinski has been offered a three-year deal to remain at Whitten Oval until the end of the 2024 season.

St Kilda free-agent Luke Dunstan's time with the club is over, per reports from SEN's Sam Edmund.

According to a report from Edmund on Wednesday afternoon, the Saints were unprepared to offer the South Australian a contract for next season, despite his surprising return to form in the back half of the season.

FULL STORY: Dunstan not to be offered new deal

Sydney Swans star midfielder Luke Parker and his management are looking for a long-term contract to secure the 28-year old's services, worth around $700,000 per season, per SEN's Sam Edmund.

The Swans co-captain is set to become a free-agent at the end of the 2021, with his current contract that he signed in 2016 set to be completed at the cessation of the Swan's season.

According to Fox Footy's Tom Morris, the Demons may be interested in acquiring the 2020 Peter Crimmins Medallist.

Essendon have set their sights on a Mabior Chol, with the tall Tiger entering this off-season as an unrestricted free-agent.

Mitch Cleary has told AFL.com.au that the Bombers have 'doubled down' on their interest for the 24-year-old Chol, who wouldn't cost a single pick if lured.

Meanwhile, St. Kilda swingman Josh Battle is reportedly weighing up his future at the club.

The 22-year-old's name has been raised in trade talks by rival clubs who now believe Battle could be up for grabs.

The 24-year-old has played just five games this season, falling behind in the pecking order to the likes of Ben Brown, Tom McDonald, Luke Jackson and Bayley Fritsch this season as the Demons claimed the minor premiership.

Melbourne have also been linked to Hawthorn spearhead Jack Gunston, raising further questions as to where Weideman's future lies.

Hawthorn are understood to have tabled an offer to Fremantle free agent Lachie Schultz, per The West Australian's Jordan McArdle.

The Hawks have previously shown interest in the Dockers goal-sneak, and have now reportedly handed a three-year contract to the 23-year-old.

After being delisted and then retained as a rookie at the end of last season, Schultz is able to take up his free agency rights and walk, potentially returning home to Victoria.

The Bombers are reportedly keen to lure Gold Coast forward Malcolm Rosas Jnr to Tullamarine this off-season, according to The Herald Sun.

Rosas made his AFL debut in Round 9 against Brisbane, going on to feature in two more games and a third showing as an unused medical sub.

Despite failing to boot a goal in 2021, Rosas has shown plenty of promise in his short career with the Suns across two seasons in Queensland.

Cornes: Gun Cat could be on the trade table

Outspoken media pundit Kane Cornes has suggested that if Geelong is to bow out of the premiership race with back-to-back losses, then they should consider moving key names this off-season.

Speaking in the wake of the Cats' heavy Qualifying Final loss to his old side on Friday night, Cornes raised the notion of moving on 2020 All-Australian Cameron Guthrie during the upcoming trade period.