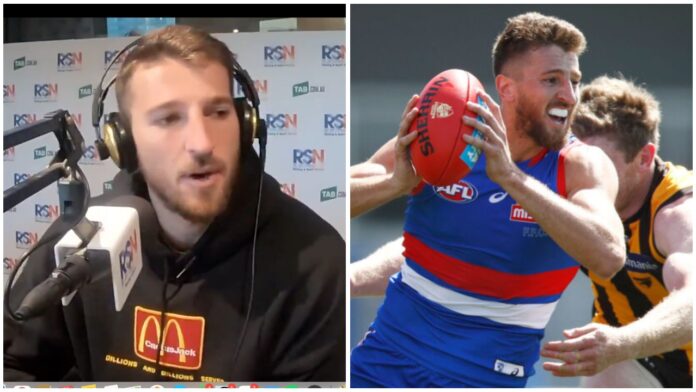 Out-of-contract Western Bulldogs skipper Marcus Bontempelli says he is in no rush to sign a new deal, but confirmed there is 'really good dialogue' happening with the club.

Set to be the biggest star to hit the market, the star midfielder will become an unrestricted free agent should he not re-sign with the Bulldogs during the season.

And you can bet there will be 17 rival clubs keeping a close eye on things the longer talks drag out.

Speaking on RSN radio, Bontempelli said he remains focused on playing good footy, leading the Bulldogs and being the best teammate he can, with contract talks not playing on his mind.

"Not in terms of does the contract play on my mind, not personally," the three-time All-Australian said.

"That's a separate conversation to my football, and obviously playing the best I can, captaining the club the best I can and being a reliable teammate is always my number one focus.

"For me to continue to focus on those three things is really all I think about. And obviously week to week, us being able to grow as a team and how I continue to influence games in the best matter is always my focus regardless of what's happening in the background.

"I know at times it's difficult, in can become part of the storyline for some people, but at this stage it's not for me."

Bontempelli, who turns 26 later in the year, reaffirmed that he won't be rushed into getting a deal done, stating talks 'take as long as they need to.'

However, he assured that discussions between his manager - Tom Petroro from TLA - and the Bulldogs are positive.

"It is an important decision, and I've said this all along, it takes as long as it needs to. I won't be rushed into a decision," Bontempelli said.

"The most important thing for me is that the dialogue and the conversation with my manager Tom and the club is going well. And that's really the key for me and we'll get to the result whenever we do.

"As long as people understand that the dialogue is really good and both sides are really happy then that's the main thing for me."

The Bulldogs currently sit second on the ladder with a 7-1 record, having won their first consecutive six games.

Bontempelli is enjoying another superb season, averaging 26.8 disposals, 7.1 inside 50s and booting a total of nine goals to sit firmly in the All-Australian mix.

Luke Beveridge's side comes up against Port Adelaide at Adelaide Oval this Saturday at 7.40pm AEST.

Positive news for @westernbulldogs fans with Marcus Bontempelli giving us the latest about his contract situation. pic.twitter.com/DK4vJexIkw