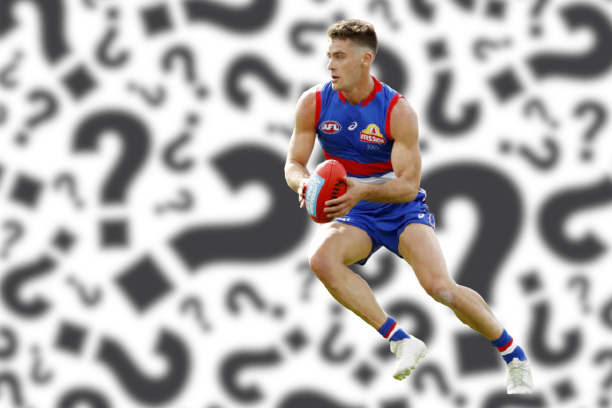 Western Bulldogs star Josh Dunkley has declared his 'future is settled' at the Kennel despite requesting a trade to Essendon in the off-season.

The Bulldogs were seeking two-first round picks from the Bombers for the 24-year old, who were only willing to part with one top 10 pick.

It led to a trade impasse and and meant Dunkley - who is contracted at the Bulldogs until the end of 2022 - was denied his move.

The gun onballer was in All-Australian form in the early rounds of the season before suffering a shoulder injury in Round 6 that required a full reconstruction, sidelining him for at least three months.

Asked about his future on Triple M's The Sunday Rub, the injured star said he can envision himself staying at the Bulldogs but hasn't put much thought into it.

"I feel like my future is settled, I haven't thought about it to be honest," Dunkley said.

"At the moment, the first few games and I just wanted to play well for the team. And thats what I do.

"At the moment I'm out injured so that's what my focus is and I haven't even thought about anything later on in the year."

Dunkley also provided an insight into the fallout from his trade request and how we was welcomed back with open arms to the club.

The midfielder explained how he put his head down and trained hard over the pre-season, recording a personal best result in his fitness test.

"My mindset didn't change too much at all," he said.

"The club were great, we had some really good conversations. I knew from day one of pre-season that I wanted to put my head down and work hard.

"The boys and everyone was really good at the footy club. I came back and I did that, I ran a PB in my fitness test, and that's where it all started.

"So from there it was really good to be able to continue to build the chemistry with the boys and obviously got some exciting players in as well.

"So it was a really good pre-season and we moved that into the season and obviously won our first six."

The premiership player has made 84 AFL appearances for the Bulldogs since making his debut in 2016.