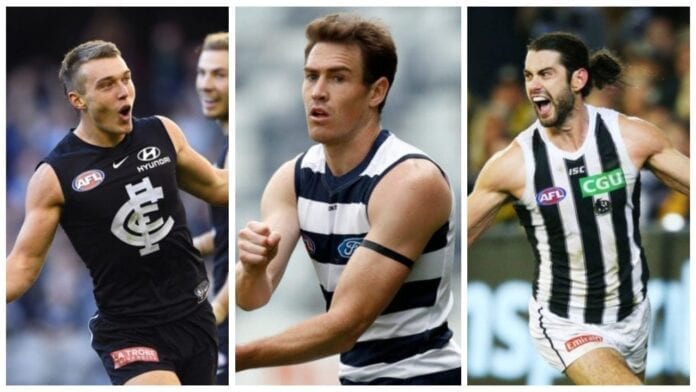 Once the marathon home and away season is completed, supporters will once again sit pensive, as the All-Australian team for 2021 is announced.

As the squad is perennially divisive, every fan of every creed is more than willing to part with their two cents and pot the former players tasked with forming the 22.

Although we are placing ourselves squarely in the crossfire before a ball has even been kicked in anger, we at Zero Hanger have dusted off our crystal ball and placed ourselves in the judge’s hot seat.

We are aware that there will be far more howls of condemnation rather than rounds of applause, however, here are the 22 names that we feel could end the season clad in a green and gold jacket.

Right off the bat, we’ve done the maths for you – of last year’s squad, 12 names have returned and 10 are set

We apologise for the rise in some of your blood pressure already.

Lining up alongside a trio of returning stars in our team’s defence are a pair of debutants and a representative mainstay across the past decade.

The tall timber in our back 50 is comprised of Melbourne’s Steven May, Brisbane’s Harris Andrews, the Giants’ Nick Haynes and the Eagles’ intercept king Jeremy McGovern.

Both Haynes’ and Andrews’ 2020 form, paired with the high probability of replicating it this season, was enough to get them a guernsey. According to the ever-reliable AFL Tables, the pair combined for a total of 192 marks last season, as well as 112 rebound 50s.

May’s inclusion comes of the back of his well-publicized snub at the end of last season and his superb form in the Demon’s demoralizing loss to the Dogs in the AAMI Community Series. The big bodied back found the ball on 27 occasions in the loss and rounded out his injury affected outing with 9 marks and a whopping 539 metres gained.

Steven May sustained a mild concussion during Monday's AAMI Community Series match + will now undertake a graded return to training.

The reinjection of Jeremy McGovern for the first time since 2019 is contingent on him playing close to every week in blue and gold. The eagle-eyed defender managed 23 appearances for his club, but will need to keep the trend stable if he is to add to the four blazers currently hanging in his cupboard.

Sitting at the feet of these behemoths is the returning Caleb Daniel and debutant Nick Vlastuin.

With the game set to be faster than any other year in recent history, the stage is set for the Daniel to take games once again by the scruff of the neck and the league by storm. In his only official hit out of the pre-season, the pint-sized pup collected an effortless 34 disposals – 18 of which were kicks – and 108 Fantasy points.

In his side’s win over Melbourne, the half-back flanker also gained 433 metres or when converted, 258 times his height.

After three flags and a pair of top four finishes in the Tiger’s best and fairest counts, we feel the time is right for Nick Vlastuin to take his game to the next level. Some may feel that his backline buddy Jayden Short appears better placed for an inaugural elevation, but with the redhead’s leadership capabilities, we have him slightly ahead.

Since playing a role in Richmond’s 2017 Premiership team, Vlastuin has played 65 games and averaged 16.6 disposals across them. This may seem minimal, but after viewing the ‘Making Their Mark’ documentary and witnessing Damien Hardwick’s reaction to his Grand Final injury, it is clear that the former Northern Knight is a vital cog in the Tiger machine.

Both Gary Ablett and Nick Vlastuin have been helped off the ground in a wild sequence of play. #AFLGF pic.twitter.com/hA4gZbXoFe

Casting our eye further up the ground to the centreline, we have picked Patrick Dangerfield to return back up the ground to play alongside debutant Lachie Hunter and Andrew Gaff for the first time since 2018.

With the Cats loading up on seasoned talent in an effort to land their 10th flag, if they are to salute on the last Saturday in September, you bet your bottom dollar that Dangerfield will have played a leading role.

The star Cat still managed to average upwards of 20 disposals and just shy of a goal a game in a season where he was impeded by both injuries and shortened quarters. With some midfield aid coming in the form of Shaun Higgins and Isaac Smith, you would be brave or foolish to believe that the Moggs Creek man isn’t well placed to claim his ninth All-Australian selection.

Andrew Gaff’s credentials as a winger are well known, as evidenced by his selection in the position in both 2015 and 2018.

Like Dangerfield, the West Coast accumulator was hindered by shortened quarters. Gaff’s numbers dropped from 31.9 disposals per game in 2019 to 24.2 last year. However, the expanses of Optus Stadium paired with the new man on the mark rule should see him return to the beefier statistics of his pre-2020 career.

Although his midfield mate Jack Macrae held an All-Australian wing position in 2020, we have Lachie Hunter usurping him for his first jacket.

Hunter has long been a favourite with Fantasy freaks and SuperCoaches everywhere for his ability to find the pill at will, and with the Dogs set to play a quick brand of footy this season, don’t be surprised if the father-son pick plays an integral role in many of the Pup’s forward thrusts. Hunter last year averaged 25.3 touches across his interrupted season and should better that this year. Should he heighten his ability to hit the scoreboard frequently, he’ll be close to a lock.

Shifting forward to our front six, we have only added two names to those that were selected last season. Ironically enough, they are both named Cameron.

Jeremy Cameron has been traded to Geelong. pic.twitter.com/sQELXS42T2

2019 proved a career year for the former year with his 79.50 in front of the sticks enough to claim his maiden Coleman medal. Following this peak, Cameron hit his career trough in 2020, with just 24 goals - a 31.5% drop off.

The Dartmoor spearhead will be licking his lips at the prospect of service from names like Duncan, Guthrie, Dangerfield and Hawkins, with the latter pair leading the league for goal assists last season with 23 apiece.

At Jeremy’s feet in the forward pocket is Brisbane-based Harley enthusiast, Charlie Cameron.

The Lions’ livewire has slotted 105 majors in his 54 games with the club – including 57 in 2019 at an average of 2.4 a game. Should these number remain stable, or improve, you can be sure that the Mount Isa man will be in contention to claim his second blazer.

Charlie Cameron was remarkable as he led the Brisbane Lions with 57 goals in 2019.

In our Leading Goalkickers series, we’ll rank the top five goals from each club’s spearhead this season and you can watch every goal on the AFL YouTube channel: https://t.co/bEXyRl9ofn pic.twitter.com/XuUrPIuIHc

Rounding out the forward line are four names from last season – Charlie Dixon, Marcus Bontempelli, Dustin Martin and ‘Flyin’ Liam Ryan. As we are tipping all to have big seasons, we don’t have them sliding from their current slots.

We move now to possibly the most contentious line on the ground – the rucks and rovers.

With the starting ruck position, we have stuck with the incumbent Nic Naitanui. At the big Fijian’s feet, we have included the reigning Brownlow medalist Lachie Neale for another year and reinjected Blues’ skipper Patrick Cripps.

Cripps’ inclusion is the one that is best placed to draw ire, after his 2020 season fell well below his benchmark. However, with support in the engine room in the form of Zac Williams and the development of Sam Walsh, amongst other names, we expect the Western Australian to return to his 2019 output that saw him average 28 touches per game.

Patrick Cripps has spoken out on his contract situation.

With our starting 18 set, we now ask you to cast your eyes to the boundary line. Prior warning, our back-up ruck may infuriate a few.

Placed on the pine we have 2020 All-Australians, and Brownlow bolters, Christian Petracca and Jack Steele alongside well-deserving debutant Mitch Duncan and returning Pie Brodie Grundy.

Like many names on this list, many of the names that we have either reinjected or included for the first time had poor seasons in 2020., with Brodie Grundy was no exception.

The South Australian claimed his second successive AA nod in 2019 after a season that saw him once again top 1000 hitouts. Despite this dominance at stoppages, the 26-year-old managed just 595 – a 41.78% drop off.

Melbourne fans and Max Gawn stans will probably want my head on a stick after this, but after a down year last season, we have the manbunned Magpie bouncing back in 2021 – even if Mark Robinson has the bearded Demon two places higher in his top 50.

What a run from Brodie Grundy!

With our 22 named and your gears now well and truly ground, let us know how we went.