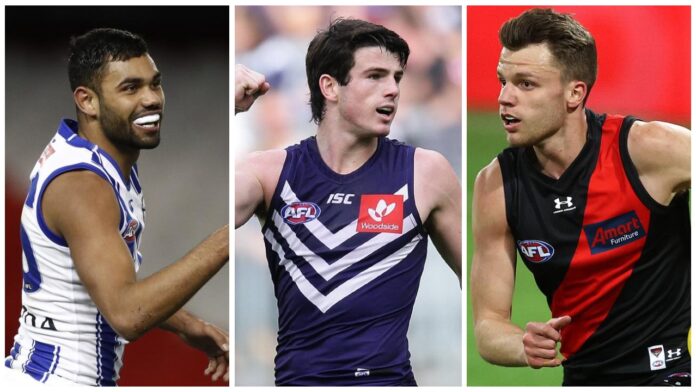 With the 22under22 squad being announced, we decided to have our say on who should make the final lineup.

To have your say and vote on your 22, click here.

Brisbane's young lockdown defender has had a breakout season in 2021. Often getting the jobs on big-name hybrid forwards such as Jordan De Goey and Robbie Gray, Starcevich has more than held his own.

The young Lion is averaging 12 disposals and four rebound 50's a game this season, but is better known for his defensive assignments.

Sam Taylor is quickly moulding into one of the more reliable key defenders in the AFL. The GWS product is receiving the oppositions best key forward more times than not in 2021 as a result of a mounting injury toll at the Giants.

So far in season 2021 Taylor is averaging 15 disposals and six marks, and also ranks 11th in the league for total intercepts. A terrific job on Tom Hawkins in the Giants' Round 21 win over the Cats was Taylor's signature game this season.

In his third season, Isaac Quaynor has continued to impress. Providing the Magpies with run and carry off half-back, Quaynor is averaging 18 disposals and four rebound 50's per game.

At just 21-years of age, Isaac Quaynor could develop into a long term midfield option for Collingwood.

Essendon's Jordan Ridley has developed into one of the game's best defenders regardless of age.

Winning the Bombers' best and fairest in 2020, Ridley has continued on his from into 2021. Collecting 21 disposals and six marks per game, Ridley also received the vice-captain role within this team.

A key cog in the Sydney back six, Tom McCartin has become a reliable option for John Longmuir. The 21-year old seems to have found his role behind the footy, ranking 11th for one-percenters and 13th for total intercepts this season.

McCartin has also showed he can match up with the oppositions best key forwards, duelling with the likes of Harry McKay and Tom Hawkins this year.

After playing just the seven games in the previous two seasons, Changkuoth Jiath has burst onto the scene in 2021.

In the absense of James Sicily, Jiath provided the Hawks with the ability to intercept the ball and then create going back the other way.

His pace and willingness to take the game on makes him one of the more exciting players to watch across the league. Unfortunately injury cut his season short at 16 games.

A big part of the Western Bulldogs star-studded midfield, Bailey Smith has put together another terrific season.

Averaging 23 disposals and 3 tackles per game, Smith has shown an ability to win his own ball but also been damaging on the outside distributing.

His running capacity has been impressive and earns him a place on the wing.

The number 2 overall pick from the 2018 draft has played nearly every position so far in his short career. However, his elite kicking skills indicate he may be best suited up around or behind the ball.

A tall, rangy athlete, Lukosius provides a skillset unlike many others in the league. Ranking 1st in total metres gained along with 7th in total kicks, the young Sun has shown how damaging he can be this season.

The only true recognised ruckman in the squad, Luke Jackson picks himself. The favourite for the Rising Star award this season, Jackson has enjoyed a terrific season for the Demons.

Under the tutelage of star Ruckman Max Gawn, the young Demon has averaged 13 disposals and 10 hit-outs per game, along with booting 13 goals.

No surprises here, Sam Walsh has already become a superstar of the competition and is expected to poll extremely well in the Brownlow Medal count at the end of the year.

Walsh is averaging 30 disposals, five clearances and four inside 50's per game in 2021, and also showing an ability to hit the scoreboard with 12 goals. A captain in the TAC Cup, Walsh could very well become a future Carlton captain, and he fills that role in this team.

Suns star Touk Miller becomes the fourth player to reach 200 votes 🌟 With two games left, can he take the crown?

Apart of a young and talented Fremantle crop, Brayshaw is transforming himself into one of the games top midfielders. Averaging 28 disposals and 3 tackle per game, Brayshaw ranks 6th in the AFL for uncontested possessions and 11th for handballs.

A huge performance in Round 20 saw Brayshaw collect 39 possessions and 12 tackles in a win over Richmond at Optus Stadium.

Another of Fremantle's talented young midfielders, the former number 5 draft pick is developing into one of the games smoothest movers.

Adam Cerra ranks inside the top 20 for inside 50's across the competition, whilst also averaging 23 disposals and 3 clearances per game in 2021.

In 2021, Zac Bailey has never been far from the headline. Not being awarded a potential game winning holding the ball free kick in a round 2 loss to Geelong was then followed with a goal after the siren in round 3 to defeat Collingwood.

Bailey has become a damaging half forward collecting 18 disposals a game in addition to kicking 27 goals. The 21-year old is also in the top 20 for score involvements.

In a position not short of young talent, Ben King wins the race at centre half-forward. Currently sitting sixth in the Coleman Medal race, King has booted 43 goals this year. Standing at 202cm tall, he ranks 8th in total marks taken inside 50.

Richmonds Shai Bolton has developed into a damaging midfield/half-forward option for Damian Hardwick. Bolton has shown his attributes both on the ground and in the air, flying for spectacular marks on more than one occasion.

Thomas has shown the football world the talent that he possesses in 2021. A top 10 selection in the 2018 draft, Thomas has given North Melbourne fans an exciting glimpse into the future.

Ranking 13th in total bounces this season, the young Kangaroo has genuine x-factor. Thomas is averaging 18 disposals and a goal per game this season.

Owning quite possibly the best hands in the competition, Aaron Naughton is a nightmare matchup for opposition defenders. Having slotted 38 goals this season, the young Bulldog ranks 1st for marks inside 50 and fourth for contested marks.

Twin brother of Ben, Max King also earns himself a position in the forward line. King has kicked 36 goals so far this season, highlighted by a six-goal haul against West Coast at Optus Stadium. A threat in the air, Max ranks fifth in contested marks and sixth in marks inside 50.

A supremely talented footballer, Oscar Allan is another exciting key position player in this squad. A genuine swing man, Allan has been deployed just about everywhere so far this season by Adam Simpson, however fills the role of a back up ruckman/forward in this side.

One of the finds of the season, Dylan Moore has broken into the Hawthorn lineup and played some terrific footy. Averaging 15 disposals a game, the young hawk has hit the scoreboard 27 times as a small forward which is impressive.

The son of the great Peter Daicos, Josh is carving out a nice start to his own career at Collingwood.

Daicos has shown the ability to play on a wing, at half forward or inside as a midfielder early in his career, averaging 19 disposals and almost 3 clearances a game in 2021.

The young Docker joins teammates Andrew Brayshaw and Adam Cerra in the side. Serong is averaging 22 disposals, 4 clearances and 3 tackles per game in 2021.