We are looking back at the best teams of the modern era and asking you – who is the greatest?

We’ve put 16 of the best sides from the 1980s onwards in a head-to-head elimination tournament where the winner will be voted by you!

There are two groups and four matchups in each section. The winner of each group advances to the grand final. 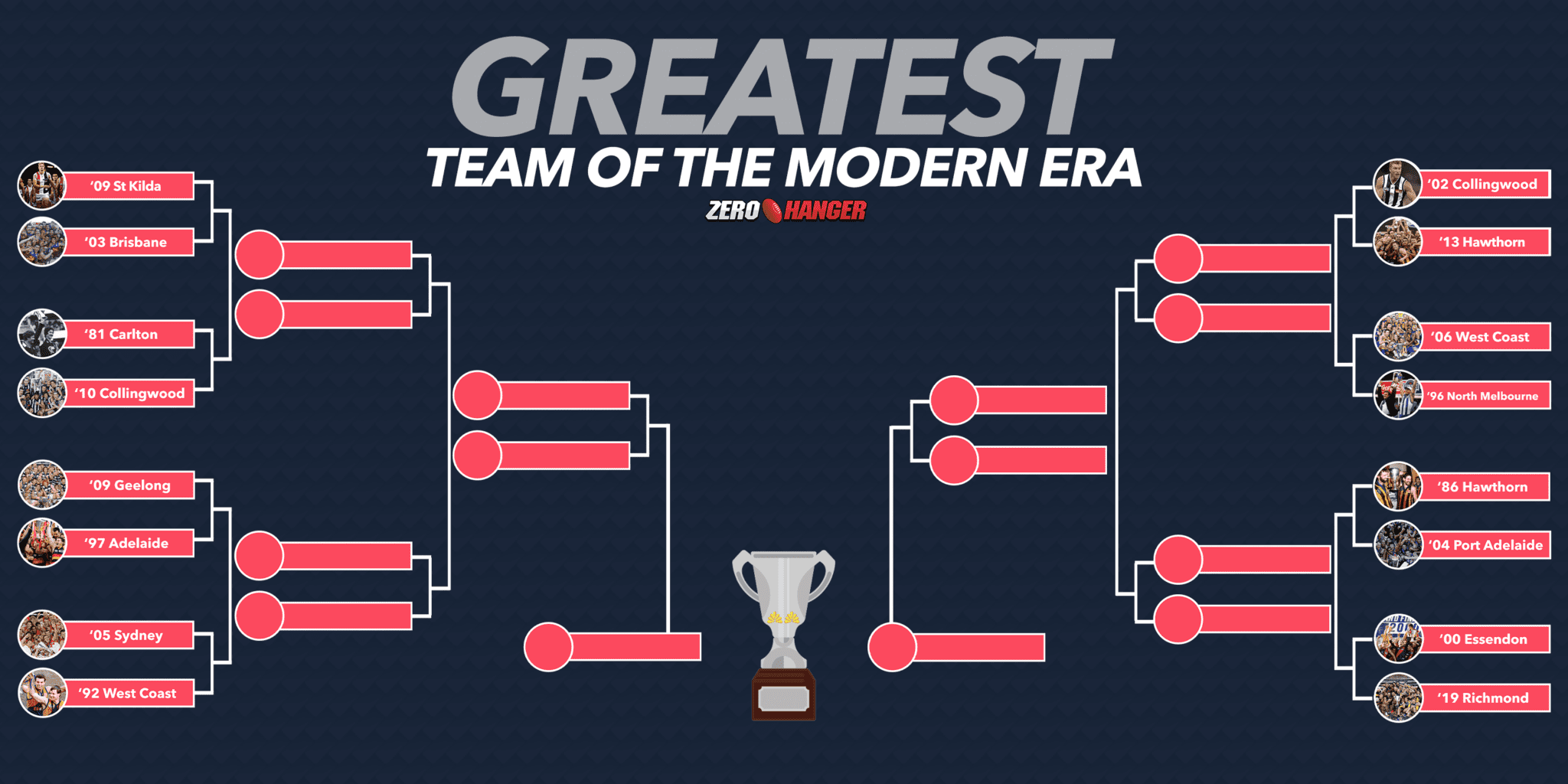 We will combine the votes from our Facebook and website polls after one week, with winners advancing to the next round where we will post an article showing the upcoming matchups.

Teams from the 80s will face off with teams of the 2000s to create some of the best dream matches we could imagine. Some old rivalries are reignited from different eras and some of the positional matchups are incredible.

So, let’s get underway. Here is Round 1… The 2003 Brisbane team were at the peak of their powers, completing a threepeat with their most dominant Grand Final win yet with a 50-point smashing to Collingwood. They were stacked with stars like Michael Voss, Jason Akermanis and Simon Black in midfield. They would advance the ball up the ground and look up to Jonathan Brown and Alastair Lynch.

Their defence was scary – the Scott brothers flanked Mal Michael and Martin Pike. Darryl White was cut from a different cloth and Chris Johnson was hard as nails and as skilful as they came.

They face off against St Kilda of 2009, arguably the best modern day side to not win a flag. The Saints dominated the home and away season going 20-2. They seemed destined for premiership glory after beating Geelong in the qualifying final but fell agonisingly short on the final day of the season against the Cats.

Nick Riewoldt was a step above the competition in 2009 and their midfield was deep with the likes of Nick Dal Santo, Brendan Goddard, Leigh Montanga and Lenny Hayes leading the way.

Carlton were incredible in the 80s. Three premierships would usually mean the domination of a decade but Hawthorn at times overshadowed the Blues. Wayne Johnston was a bull and Bruce Doull could shut anyone down and won the Norm Smith Medal doing so.

In 1981, this Carlton team was at its peak. David Rhys-Jones was hard as nails and that typified the Carlton side of the time.

They take on Collingwood of 2010, a team credited with a change of the game that is still in effect to this day. Pressure was king for the Pies, who prided themselves on hunting the opposition. Led by Dane Swan and Scott Pendlebury Collingwood won their 15th premiership and changed the game forever.

In 2009, Geelong played an attacking game style that has been described as the most attractive football we have seen. They moved the ball via the corridor with lightning quick hands and delightful foot skills.

Their list was stacked – Gary Ablett Jr was arguably the best player in the game, Jimmy Bartel was the league’s best big-game player. Steve Johnson was as creative around goal as anyone, while Matthew Scarlett might be the best defender of the century.

Top to bottom they were full of talent and three premierships in five years was just rewards for an incredible team.

Good luck goes out to Adelaide of 1997, they’ll need it in this match up. Andrew McLeod led the club to their first two premierships in ’97 and ’98 and if Darren Jarman flicks the switch, who knows?

In 2005, Sydney broke a 72-year premiership playing a game style that was criticised by even the AFL CEO at the time Andrew Demitriou. They weren’t big scorers, they weren’t flashy. They were compact and structured. Incredibly hard to score against, they helped put a new emphasis on defence that has stuck with teams to this day.

They face off with the West Coast of 1992. The Eagles were just as hard, tough and fierce. Led by John Worsfold they would outlast their opposition in the clinch then with the likes of Peter Matera they would exploit teams on the outside. They had it all. Hawthorn’s 2014 premiership side set up a threepeat dynasty hailed as arguably the greatest of all time. Their grand final wins were emphatic to say the least. The dismantled Fremantle’s game plan before physically dominating Sydney and then blowing West Coast off the park.

We chose the 2013 side given Buddy Franklin was still around. And while the Hawks arguably got better and were more unpredictable without Buddy, we want in him in our side in a tourney like this!

Their foot skills could cut up any opposition and keep the ball away from teams at nauseam. Everywhere you looked they had elite ball users and that made them untouchable.

Collingwood’s 2002 side are tasked with knocking off the Hawks, but it’s nothing they haven’t come up against before. The Pies made the big dance in both 2002 and 2003 and can consider themselves unlucky to have run into a dominant Brisbane side on both occasions. If they met any other team at the time, they could’ve been the league’s most decorated side.

Nathan Buckley was in his prime and had a very good support crew – Scott Burns, Paul Licuria, Shane O’Bree, James Clement, Shane Wakelin, Anthony Rocca and Alan Didak just to name a few. Plus they had one of the greatest coaches of all time in Mick Malthouse steering the ship.

West Coast’s 2006 side had arguably the greatest midfield ever – Dean Cox, the premier ruckman of the century, tapping down to Ben Cousins, Chris Judd and Daniel Kerr.

Not blessed with the greatest key position stars, this Eagles team played their part in one of the modern era’s greatest rivalries against the Swans. Their flag in 2006 was richly deserved. Had they been more disciplined off the field, who knows how many more premierships they could’ve won.

The midfield to oppose this juggernaut in Round 1 is North Melbourne of 1996. Wayne Schwass, Shannon Grant, Brent Harvey, Anthony Stevens and their fellow Shinboners come with plenty of ability but the Kangaroos ace is centre half forward Wayne Carey.

The King was at his peak and there was no stopping him. He was untouchable at his best and widely considered the best player of all time.

Hawthorn famously dominated the 1980s and were top shelf for the entire decade. From 1983 until the end of the decade they played in every grand final, winning four of those.

Dermott Brereton, Gary Ayres, Robert ‘Dippa’ DiPierdomnico, Terry Wallce, Jason Dunstall, Michael Tuck and more were all coached by the great Allen Jeans in 1986. It’s a team sheet to rival any we have ever seen. Their physicality and toughness was often unmatched and had them positioned as a clear powerhouse.

Port Adelaide’s 2004 side will have their hands full trying to take down the Hawks. But the Power were giant slayers. They won their first flag in 2004 after years of failing to fulfil their home and away season dominance.

Led by Gavin Wanganeen, Shaun Burgoyne, Josh Carr and Byron Pickett in the midfield, Warren Tredrea up forward and a roaming Chad Cornes who could do it all, the Power finally made the leap and ended a potential Brisbane fourpeat.

Lastly we have Essendon of 2000 taking on Richmond of 2019. The Bombers were incredible, James Hird and Matthew Lloyd led an Essendon side that maybe should have won more premierships then the one.

They were just about unbeatable in 2000 going 21-1 – there was almost no doubting that they were going to be premiers in 2000. The played with a raw aggression, a loss in the 2001 Grand final is somewhat forgivable given Brisbane went on to win three in a row.

Richmond have been dominant in recent times. Dustin Martin has been invincible and might be a top five player of all time when it’s all said and done. The Tigers have gone from strength to strength since their breakthrough flag in 2017, but in 2019, they were on a different level to anyone.

The were superb throughout the home and away season and overcoming a savage run of injuries early and stepped up to an unmatchable level come finals. The Tigers pressure and ability to score from turnover is scary good and this looms as the matchup of the first round.

Mick Malthouse names the SIX sides that can win the premiership...

Essendon star unlikely for Round 2

Majak Daw’s season could be over already