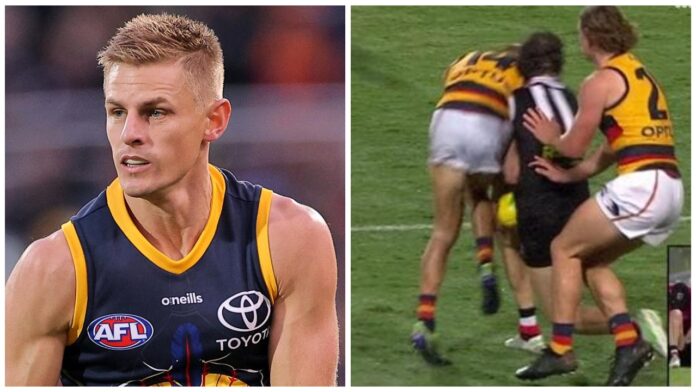 Adelaide veteran David Mackay has officially been cleared by the AFL tribunal for his collision with Saints youngster Hunter Clark.

In a landmark decision, Mackay will be free to play next week against Carlton, after the tribunal came to the conclusion after much deliberation, stating the conduct was not unreasonable.

Adelaide and Mackay pleaded not guilty to the charge of rough conduct.

The verdict was decided upon by jurors David Neitz, Paul Williams and Richard Loveridge, and handed down by tribunal chairman Geoff Giudice.

The AFL counsel argued that contesting the ball is not a licence to cause serious injury to another player, per The Age.

The league's representatives also suggested the incident was foreseeable and that Mackay was the only player in the collision that was shaped to bump.

Mackay's representatives closed their submission stating it was a 50-50 ball and that it was a reasonable decision for Mackay to attack the ball.

There was also suggestion that Crows youngster Sam Berry nudged Clark before impact.

The case was referred directly to the tribunal by AFL football operations boss Steven Hocking after Clark suffered multiple breaks in his jaw, as well as dental and nerve damage following the 32-year-old's bump last Saturday night.

The AFLPA has made a submission to the Tribunal for the first time since 2014. It didn't comment on whether Mackay should get off or not, but critiqued the AFL's processes. @FOXFOOTY

Clark is slated to miss anywhere between six to eight weeks of football, as well as more than a month of training.