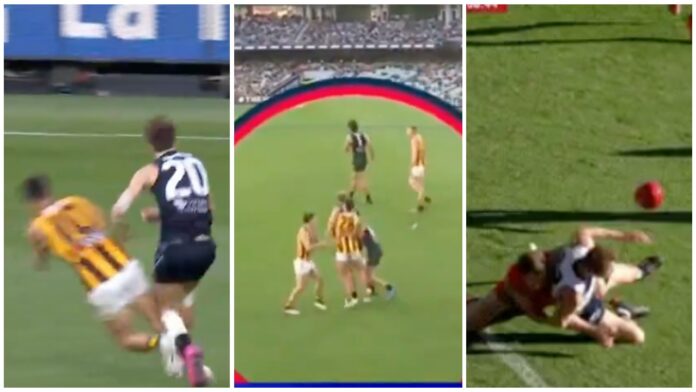 Match Review Officer Michael Christian has handed down three suspensions from Round 10 in a busy weekend of footy.

Carlton's Lachie Plowman has been charged with engaging in rough contact with Hawthorn’s Jaeger O’Meara in Saturday's clash at the MCG.

The incident was graded as careless conduct, high impact and high contact, with the defender offered a two-match ban with an early guilty plea.

Carlton defender Lachie Plowman has been offered a two-match suspension after being charged with rough conduct by the Match Review Officer.

It would rule Plowman out of the Blues' upcoming matches against Sydney and West Coast.

Fox Sports' Tom Morris report that Carlton is strongly considering contesting the ban, with 11am on Monday being the deadline for which they can.

Furthermore, Hawthorn's Kyle Hartigan was cited for an incident in the same game for striking Blues star Sam Walsh in footage that was caught on a fan's mobile phone.

Hartigan will miss three matches with an early plea ahead of the Hawks' matchups against Gold Coast, Sydney and Essendon.

Lastly, and the one which has been met with the most controversy publicly, Gold Coast's Nick Holman has been offered a two-match ban with rough conduct for a dangerous tackle against Geelong's Mitch Duncan in Saturday's contest at GMHBA Stadium.

This is ridiculous! A chase down tackle and Nick Holman @GoldCoastSUNS is suspended for 2 weeks. What’s the game coming to?! @AFL pic.twitter.com/7vOe7mER3n

The incident was deemed as careless conduct, high impact, high contact, with Duncan suffering a concussion and missing the rest of the match.

If Holman accepts the ban, he will miss the Suns' next two games against Hawthorn and Fremantle.