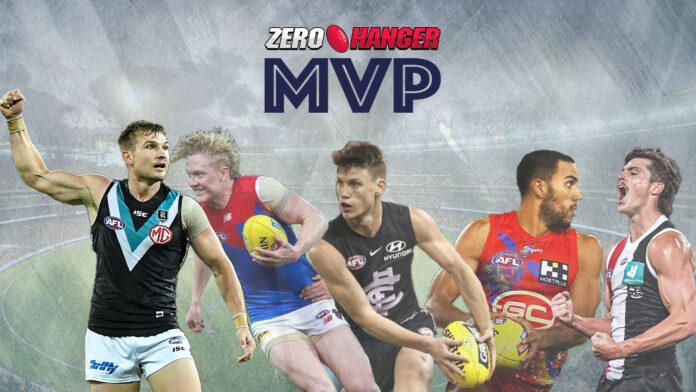 After a long season, with plenty of elite performances, we can finally crown a winner in the 2021 Zero Hanger MVP!

Four members from our team – Mitch Keating (Editor), Ed Carmine (Deputy Editor), Ed Lemmo (Digital Producer) and Nick Splitter (General Manager) have voted 5, 4, 3, 2, 1 for the best players on the ground for every match of the season.

So without any further ado, catch up on all the votes from the final week of the 2021 AFL Home & Away Season and check out the Zero Hanger MVP leaderboard below!

Despite the majority of the match being in favour of the Dogs, the brilliance of star trio Ollie Wines, Travis Boak, and Robbie Gray proved too much for Luke Beveridge's side.

The win will see Port not only receive two chances at finals, but a game at their home stadium, putting them in the best possible position for finals. The same can not be said for the Western Bulldogs, whose performance positions them outside the top four despite being in it all year.

It was a remarkable outcome for both clubs at the MCG on Saturday.

Despite the Hawks leading by 31 points before the fourth quarter, Jack Riewoldt's equalising goal with just eighteen seconds left of play left Alistair Clarkson and veteran Shaun Burgoyne without their fairytale finish.

The game was also the last for Tigers veterans David Astbury and Bachar Houli.

Sydney look well and truly ready for the finals after smashing the Suns by an impressive 87 points at Marvel Stadium.

Franklin was extraordinary up front after kicking an impressive six goals, taking his career tally up to 992, making him just eight away from becoming just the sixth man to kick 1000 goals in VFL/AFL history.

Jordan Dawson and Touk Miller were both also exceptional in the midfield for both their teams, with Miller continuing his record-breaking 30+ disposal streak for the 16th week in a row.

In a dramatic final 30 seconds of footy, the Brisbane Lions have secured a place in the top four.

Lincoln McCarthy’s behind not only made up the 0.1 percentage difference needed to secure a double chance at finals, but completely knocked the Eagles out of the eight.

Lions skipper Dayne Zorko and midfielders Neale and Rich were particularly influential in securing the win. Nic Naitanui was also exceptional for the Eagles, securing 24 disposals.

Max Gawn has given the Dees their first Minor Premiership since 1964.

Despite being down four points with just a minute left of play, the skipper's magnificent mark within the dying moments of the game not only secured Melbourne the win but created arguably the best moment in the entire round.

Oliver and Gawn were exceptional for the Demons. Oliver collected an impressive 39 disposals, nine clearances, and two goals, whilst the skipper had an exceptional 25 disposals at halftime alone.

Greater Western Sydney have secured a spot in the eight and will play finals footy.

Despite a slow start, Kelly and Taranto were sure to keep the Giants in the game. Callan Ward was particularly exceptional for the Giants, kicking two fourth quarter goals and finishing with 28 disposals, seven clearances and 12 score involvement.

The game was also the last for Carlton legend Eddie Betts, who managed to kick two last goals for his 350th and final game of AFL footy.

The Saints sunk all finals hopes for the Dockers on Sunday in Tasmania.

Despite Fremantle having more to play for, the Saints were too good for the tired Dockers, securing their biggest win of the season.

Jack Steele finished the season for his club in the best form possible, winning an excellent 35 disposals, six clearances and six inside 50s.

Essendon's 38-point victory over the Magpies has secured them a spot in the 2021 AFL finals.

Devon Smith played his seasons best on Sunday, kicking two goals and assisting in 10 score involvements. Stringer was also among the Bombers best after having an impressive 24 disposals, two goals and six clearances.

After not winning a final in 17 years, the Bombers come into this final series hungry and in arguably their best and most confident form.

The Crows jumped an impressive two spots on the ladder on Sunday night, after a 44-point victory over the wooden-spooners.

After a dramatic year for the Adelaide Crows, the team were able to get their fairy tale finish.

An exceptional three goals from McAdam's combined with the midfield mastery of Ben Keays proved to be too good for the Roo's, who leave the 2021 season with just four wins.