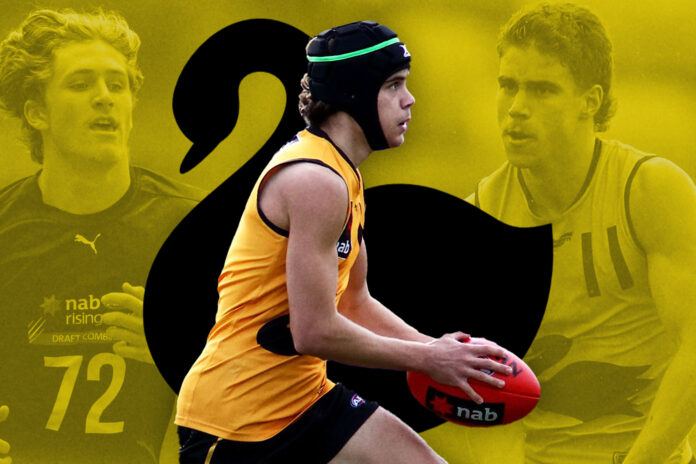 Western Australia have had a total of six top 10 draft selections in the past three National Drafts, and that tally looks set to continue into 2022 as a number of prospects sit among this year's top tier of talent.

The wave of promising WA talent has been evident through recent drafts, with the likes of Luke Jackson, Logan McDonald, Chad Warner, Denver Grainger-Barras and Aaron Naughton among those from the west that have thrived in the AFL.

East Perth and Swan Districts will lead the way this year, combining for four of arguably the state's top five teenagers, while Claremont have seen a familiar surname rise through the ranks to be a potential likely first-round selection.

Here were list the five leading WA prospects, in no particular order...

Western Australia prospect Reuben Ginbey has shot into top-10 calculations this year after an impressive 2022 season.

Playing predominately as a midfielder for WA at the National Championships, Ginbey started the season as a general defender, excelling in both roles.

His competitiveness is considered one of his greatest strengths, with his size and strength attractive to recruiters.

These traits were further cemented within his repertoire after an impressive performance at the National Draft Combine, showcasing his athleticism by finishing equal fourth in the vertical jump and in the top 10 of the running vertical jump test.

He also managed to finish in the top five for the 2km time trial and in the top 10 in the 20m sprint, impressive feats given his bulky frame.

Elijah Hewett's ceiling is a high one, with the inside midfielder another true game-breaking midfielder in this year's national draft.

At 185cm tall and 84kg, Hewett is a bull in the middle of the park and has had plenty of standout performances in his two years across both the WAFL Colts and in the WAFL with Swans Districts.

It's his explosiveness and work around the contest that makes him stand out from the rest in this year's draft crop. His endurance is also top-class and he is incredibly strong, allowing him to shake off tacklers with ease. Furthermore, the 18-year-old is able to run both ways and do the dirty work and can dish off on either foot when required.

Western Australia's opening game of the National Championships against Vic Metro saw Hewett pick up best-on-ground in a losing side as he rampaged to a 29-disposal, five-clearance and two-goal performance to further solidify his status as a future star of the game.

Small-framed Swan Districts prospect Darcy Jones is more than meets the eye, with the speedy outside midfielder an exciting talent out of Western Australia.

The 174cm, 63kg teenager has emerged as a potential top 30 selection for the draft following a strong season at the WAFL Colts level, while also featuring for Swan Districts' senior and reserves sides in 2022.

Jones took out the Swans' best and fairest honours for their youth side, averaging 25.5 disposals per game as a dazzling ball magnet.

Among WA's top performers in the National Championships, where he averaged 19.7 disposals, 3.7 marks, 3.3 tackles, 3.7 inside 50s per game, Jones is an attractive draft prospect that relies on agility and speed to avoid his opponent.

Jones' size, which places him among the 10 smallest AFL-listed players, gives him a particular window for AFL comparisons. While a little taller, Collingwood's Josh Daicos is a fitting comparison for Jones.

Claremont prospect Edward Allan has shot into first-round conversations ahead of the National Draft thanks to a strong back-end to the 2022 season.

The versatile and athletic midfielder's name was up in lights at the recent National Draft Combine, where he recorded the best time for the 20-metre sprint and also featured in the top five for the agility test.

Standing at 194cms and boasting a strong outside game, Allan is able to separate himself from the rest of the pack thanks to his wide-ranging abilities.

Having the capability to play across all three lines of the field, Allan can fit into a number of roles for whichever club comes calling on draft night.

The Mosman Park product played his best football on the wing with both Claremont and Western Australia, showing off prolific ball-winning abilities and the added edge to move forward and impact the scoreboard.

Allan saw his 2022 campaign limited due to injury, however, managed to average 25.2 disposals, 5.8 marks and 3.6 tackles from his five matches with Claremont's Colts side.

Western Australian Jedd Busslinger has worked hard to establish himself as the premier key defender of this year's talent pool and has consequently been linked with a selection at the top end of the draft.

Busslinger, standing at 197cm, is one of just two West Australians to be invited to the opening round of the draft at Marvel Stadium on Monday, an indication of his chances to strongly be considered as a top 10 selection.

He played football in the WAFL this year and impressed with his ability to look comfortable amidst bigger bodies and a higher intensity of play.

Busslinger has impressed with his maturity and ability to play with freedom in the defensive 50, with his composure ensuring that he rarely seems under pressure.

This was punctuated by his selection in the under-18 All-Australian squad despite playing only two national championship games.