COLL$3.55
ZERO HANGERAustralia's #1 independent AFL news source
More
Home AFL News Team of the Round Team of the Week: Round 20 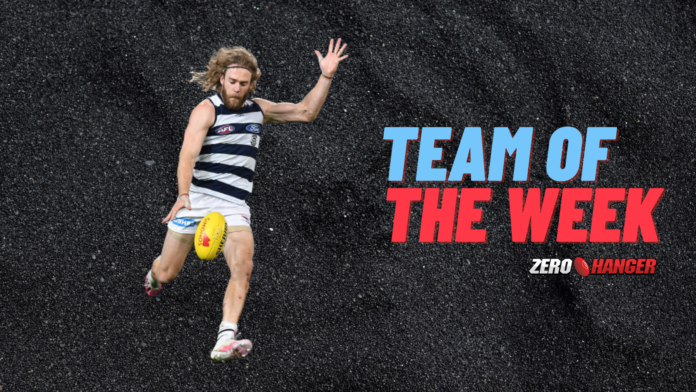 One of the best on a dominant day for the Dogs, Dale picked up 31 disposals to help his team to a 49 point win in Ballarat. Combining with the Bulldog's midfield, Dale finished with nine intercept possessions, five inside 50's and a goal. While his captain Marcus Bontempelli is in Brownlow contention, Dale is putting together a handy season, finishing with less than 20 touches just three times this season.

Often playing in the shadow of his older brother Cam, Zach stepped into the light with a career best performance after being a late inclusion in the Geelong team. Against an eager North Melbourne side, the 23-year-old stood tall, taking a match high six intercept marks and collecting a career best 28 disposals. Guthrie was awarded eight coaches votes for his standout performance, as was his brother Cam.

Alongside Dale, Daniel was one of the best for the Bulldogs on Saturday afternoon. The 25-year-old finished with a match-high 32 disposals, backing up a season best in Round 19. In addition to a goal, Daniel had five score involvements and five clearances, picking up seven coaches votes for his efforts.

Stack's standout performance across half-back wasn't enough to get Richmond over the line in a nail-biting finish against Fremantle. The 30 gamer collected 25 disposals, 12 intercept, at an impressive 96% efficiency, while also managing nine pressure acts and four score involvements.

Young Hawk Scrimshaw collected 25 touches in a seesaw match against the Lions. The Hawks managed to keep Brisbane goalless in the first term, conceding just one point from five inside 50's. Scrimshaw stood tall as the Lions fought back from a 53 point deficit late in the match, taking six intercept marks to compliment his 12 intercept possessions. While not the best Hawk on the ground, Scrimshaw's defensive work was crucial in keeping the Lions' comeback at bay.

Another impressive performance for Amon in 2021, this time against the Giants as Port solidified their spot in the top four. Amon had a game equal high of 31 disposals, topping the stats with a game best ten score involvements too. Amon kicked a goal while playing at 90.3% disposal efficiency, while the 25-year-old also laid five tackles in the win. Rewarded with ten coaches votes, Amon is edging closer to a maiden All Australian inclusion.

Brayshaw was given the best on ground nod for his effort in a close win against the Tigers. Brayshaw was the highest possession getter on Sunday afternoon, collecting a career best 39 touches. Alongside eight clearances, the young gun had an equal game best ten score involvements. In a tight match, Brayshaw's efforts were instrumental. The 21-year-old laid a game high 12 tackles and finished with an impressive 30 pressure acts.

In a high scoring shoot out, Mills was a big performer in the Swans midfield. The highest Sydney disposal getter with 33 touches, alongside 12 marks, Mills was awarded five coaches votes for his efforts, which included six tackles and five score involvements. The 24-year-old also hit the score board late in the match, kicking a goal with just under five minutes on the clock to give the Swans a game high lead.

Acting Pies captain Sidebottom led from the front against the Eagles on Saturday afternoon, finishing with 33 disposals and a goal. The third term was a particular Sidebottom masterclass, collecting 11 disposals at 100% efficiency. A game high nine score involvements willed his side to their highest score since Round 8, while 28 pressure acts left the Eagles with no where to go.

The Coleman Medal leader shined under the Friday night footy lights, kicking truly to keep the Blues mathematically in finals contention. McKay kicked 5.2 from five marks inside 50, while he combined with the rampaging Blues to finish with eight score involvements. With Taylor Walker sitting nine goals behind on the Coleman Medal tally with three rounds left, McKay better clear some room on his shelf.

Juggling his time as a fill-in ruckman, Silvagni was impressive across the ground, collecting 25 disposals and six clearances. Along with a goal, Silvagni had five score involvements and an impressive 23 pressure acts, managing to collect nine coaches votes ahead of teammate and Brownlow medal fancy Sam Walsh.

Wingard capitalized on Hawthorn's early dominance against the Lions, kicking two goals as the Hawks recorded 60 inside 50s, 20 in the first term alone. Wingard found 32 disposals in the up and down match, registering seven tackles and 24 pressure acts to try and keep the lions at bay.

Jackson dominated up forward for Melbourne as they registered a percentage boosting 98 point win over Gold Coast. The 19-year-old kicked a career best four goals and picked up 17 disposals and three marks. Importantly, the tall forward laid two tackles, one which was rewarded with a free kick in front of goal. Despite having a quiet few weeks, Jackson is still very much in the conversation for the Rising Star award.

A career-high third goal for Luke Jackson and the Dees have kicked the last five!#AFLSunsDees pic.twitter.com/iOaaabBZhX

Papley starred for the Swans in their seven point win over Essendon, awarded nine coaches votes for his efforts. The 25-year-old was the leading goal-kicker in the match, finishing with 4.1, making Round 20 the third time he has kicked four goals this season. Papley finished the game with 17 disposals and 11 pressure acts, crucial though, were Papley's nine score involvements, especially important in a narrow win.

Gawn dominated in the ruck as Melbourne overran the Suns on Saturday afternoon, ending the day with 31 hit-outs and two goals. Gawn's 16 disposals resulted in 11 score involvements, while the big man also ended with four clearances and five marks. The captains performance was rewarded with six coaches votes, taking him to 61 in total with three rounds remaining in the season.

The leading Hawks disposal getter, O'Meara was in vintage form in Round 20, collecting 35 touches at 77% efficiency. The former Sun was awarded a perfect 10 from the coaches for his performance that included a goal, 15 contested possessions, 11 tackles and presumably, three Brownlow votes.

Brownlow fancy Walsh continued his stellar season over the weekend, staring against the Saints on Friday night. Ever consistent, Walsh finished the night with 26 disposals, the 18th time he has collected 25+ this season. Walsh led the game for pressure acts, finishing with 32, while his six score involvements and three goals set the Blues up for a strong prime time win.

Oliver picked up 35 disposals during Melbourne's thrashing of the Suns, a game high and the eighth time this season the Midfield gun has ended with 35+ disposals this season. Oliver led the match with ten clearances too, while also managing nine score involvements. The 24-year-old was rewarded with nine coaches votes, extending his lead at the top of the tally as the season nears its end. With such consistent, stellar form, expect to hear the name C. Oliver plenty on Brownlow night.

Sometimes lacking consistency, De Goey proved in Round 20 that when he is at his best, he is one of the best. De Goey finished Collingwood's win over the Eagles with 34 disposals, his season best, with an efficiency of 82.4%. The 25-year-old also took seven marks and racked up six score involvements.

Adams was instrumental in the centre for the Pies, collecting 34 disposals, 14 contested, and eight clearances. The 27-year-old has been fairly consistent since his return in Round 15, ending the game with under 20 disposals on just two occasions. One of the most important players in Collingwood's engine room, the vice captain had 19 pressure acts and six score involvements on Saturday afternoon.

With a finals spot on the line, Cerra lifted for his team when it mattered. The young gun finished with 33 disposals and nine inside 50s, combining with the Freo forward line to finish with seven score involvements. Cerra's three clearances and 21 pressure acts were instrumental in getting the Dockers over the line in a four-point game.