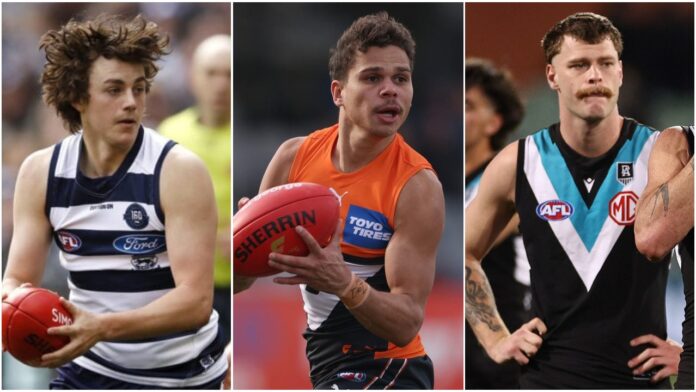 Wednesday's 7pm Trade Period deadline is nearing, with a number of deals still up in the air.

The past week has seen twists and turns place plenty of focus on the Giants, Hawks and Dockers, and there could be more surprising on the way in the coming days.

With clubs still deep into negotiations or opening new talks, these are 11 deals that are still in play for the final few days of the exchanged period.

Negotiations between the Crows and Swans look likely to extend into the final day of the exchange window, with Adelaide knocking back two lucrative offers by Sydney last week that involved multiple first-round selections.

The Swans won't want to see Dawson's name head to the Pre-Season Draft, while the Crows have made it clear they won't be parting with Pick 4.

Adelaide hold the Demon's future first-round selection, which may be the next best on offer to the Swans.

A startling outcome of the trade period, Hill looks set to venture to Victoria just weeks after being on the verge of re-signing with the Giants.

The Bombers' exchange window dealings looked to be over early after landing Jake Kelly from Adelaide via free agency, however they look set to open talks with the Giants in order to land Hill's services.

The Giants are understood to be open to moving Hill to Essendon should they also be able to acquire a small forward this trade window.

With Hill contracted, it will interesting to see what the Bombers may have give up to land the crafty goalsneak.

Similar to the Dawson dealings, both clubs look to be valuing the player differently, with the Cats having now put forward two offers to the Dockers.

Geelong have requested either Pick 19 or Pick 22 and a future third-round selection, with Fremantle mulling over which offer to take should they accept either.

Clark remains contracted for 2022 and could remain at Kardinia Park for a further 12 months should no agreement be made by Wednesday night.

This move does depend on the Lions' interest in Darcy Fort, with the Cats understood to be hoping to keep a queue of rucks behind Rhys Stanley as their first-string selection.

Ceglar could join the Cats on a cut-priced deal, which would be desirable for Geelong, and then could prompt Fort's exit.

Despite being contracted at Hawthorn, Ceglar wouldn't cost a high draft selection given the Hawks are open to parting ways with the veteran ruckman.

The Giants' interest in Wingard was sparked following Bobby Hill's desires to venture to Victoria in recent days.

Greater Western Sydney would see Wingard as the replacement they're after in order to give the green light for Hill's departure.

Plenty remains to be seen in whether the Giants are happy to hand over one of their first-round selections and if the Hawks are looking to move on any of their contracted stars.

The Swans look like the most likely destination for the Power tall should he leave, however another season at Alberton Oval remains a possible outcome given his contract situation.

Port Adelaide rate Ladhams highly and may only part with their ruckman if they are able to secure a decent return.

The Hawks won't want to give up a high pick to land Ladhams, while the Swans may also see his value differently and hold onto their selections for another year and back-in Tom Hickey following a strong first season in the Harbour City.

Another shock storyline of the off-season, there's still plenty to play out to see Lobb return to the Giants.

The Dockers won't be paying any of Lobb's $700,000 contract should he make a move east, however the Giants could settle a shorter-priced deal in order to land the forward/ruck utility.

Another name that is contracted, Lobb could remain at the Dockers for 2022, however the Giants' strong draft hand could tempt the Western Australians to part ways with their tall.

One of several names involved in the ruck 'merry-go-round' this trade period, Fort could be the player to get the things spinning.

Should the Lions remain keen on luring Fort north, the Cats could look to secure Ceglar's services and then ship their out-of-favour tall.

Fort remains contracted and desired by the Cats, however the Lions could sway trade talks in moving part of their strong range of draft picks.

The Saints utility is understood to be 'gettable', however the Bombers' interest has reportedly cooled, placing Long's fate likely to land at Moorabbin for another season as he remains contracted for 2022.

With Bobby Hill set for a move to Tullamarine, there is little chance Long makes the venture to the Bombers this trade window.

This move will be one of the last sparked in the ruck market, with the Hawks needing to move on Jonathon Ceglar to Geelong before looking to add Lynch to their young list.

The Magpies may also be hesitant in parting with Lynch given their short tall depths, with Darcy Cameron their only obvious support to Brodie Grundy should Mason Cox not be offered a new deal for 2022.

Xerri is looking for a move to St Kilda and could be the support to Paddy Ryder and Rowan Marshall next season before taking on a greater role the following year.

With Callum Coleman-Jones now arriving at Arden Street, the Roos may be open to moving on their contracted ruckman.