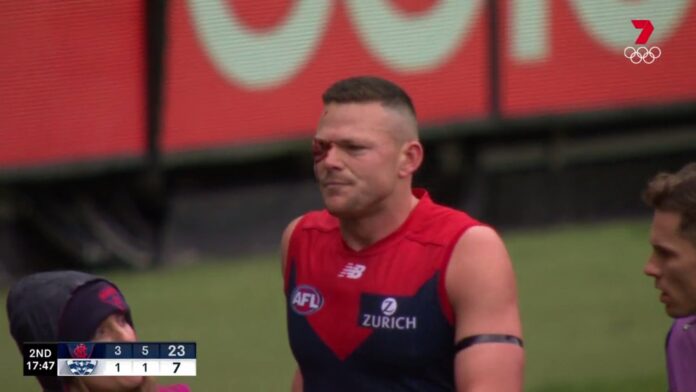 Star Demons defender Steven May will take no further part in his side's clash with Geelong at the MCG after copping an accidental elbow to the face from Tom Hawkins.

May departed the game in the second quarter with blood streaming out of his right eye and immediately went down to the rooms.

WATCH THE INCIDENT BELOW

The Demons will be sweating on the outcome of May's medical assessment - if it is deemed that the backman suffered a concussion he will be sidelined for 12 days and miss the club's Round 5 clash against Hawthorn.

The incident involving Hawkins, despite being clearly accidental, could potentially come under the eye of MRO Michael Christian, given May was subbed out and potentially concussed.

It has been confirmed that May suffered a head injury and he has been taken to hospital over concerns of an eye socket issue.

Steven May straight down to the rooms with a serious cut to his right eye. Bleeding profusely & has already ballooned into an egg #AFLDeesCats pic.twitter.com/yUBGV753Kq