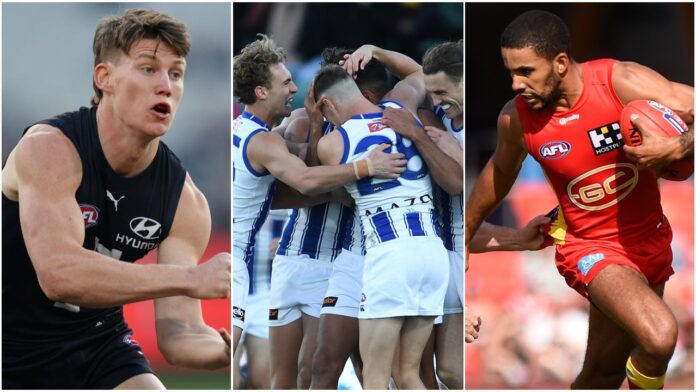 For footy fans, this time of year brings one of two things. Excitement at the prospect of September and finals, or disappointment at a season that hasn't met hope and expectations.

We all want our clubs to make finals, sadly, for the majority of the league every year, it's just not on the cards.

It doesn't mean the season is a waste though. Every season brings something positive, whether it's a new player, game plan, coach or something else.

It's easy to be cynical, but finishing the season without hope makes for a long summer. Having something to look forward to renews optimism and recharges the supporter batteries.

So if your team won't be taking part in September, here are the positives from season 2021.

The Roos have pumped games into a bunch of young players coming through the ranks who show a lot of promise.

Nick Larkey looms as a ten-year key forward, while Tom Powell looks a future ball magnet, as does Will Phillips. The emergence of Jy Simpkin, Luke Davies-Uniacke, Ben McKay and Cam Zurhaar shows that North have a core group to build around.

New coach David Noble is having a big impact on what loomed as a very tough assignment. The squad and game plan look on track. A record membership, fully redeveloped Arden St are also reasons for optimism.

Senior players Aaron Hall, Jack Ziebell and Todd Goldstein getting back to their best are further positives. Finally, another year of profit during a pandemic without the help of gambling revenue, is seriously impressive.

A tough year for the Crows, however a bright start with some good wins means there's hope. Coach Matthew Nicks seems to have gotten his game plan across.

The move of Rory Laird to midfield has been a masterstroke. All Australian selection this year looms as a real possibility. Riley Thilthorpe looks to be future star, an exciting big man can do wonders for a club's morale. They'll have the most damaging ruck combo in the league in a couple of years with Thilthorpe and Reilly O'Brien. The Pies have blooded nine youngsters and almost all of them show promise. After salary cap issues last season saw the club go to the draft, this should at least give hope to the fans that the future of the club is in good hands.

Jordan De Goey bounced back from a rough start and has been very good in the second half of the season. A new coach coming will have fans bullish that next season will be better.

Another area to note is they will likely sort out issues at board level before long. Finally, Collingwood will get the best player in the draft, despite not having a pick in the top 20, in Nick Daicos.

Ben King is a star and becoming better every year, kicking well over 40 goals this season. Matt Rowell is fit again and will be better for a few more games under his belt.

Touk Miller is now one of the best mids in the competition and will undoubtedly be All Australian this year. David Swallow has become this club's dependable statesmen, his consistent work around stoppages has been important in releasing Miller around the ground.

The Suns have more wins this season, they're trending upwards. Wil Powell looks a star in the making, while Jeremy Sharp emerged in the second half of the season as a player capable of being a Suns mainstay. Jack Lukosius continues to develop into one of most damaging field kicks in the game.

In the headlines a lot this season, the Hawks have plenty to be optimistic about. They unearthed some gems in Dylan Moore and Jacob Koschitzke. Tom Mitchell is back to his best, while Chad Wingard has had his best season for the club so far.

They won three on the trot and almost sent Clarko out in style against Richmond. Jeff Kennett may be turfed from the club after years of making it all about himself.

Finally, they're likely to have three top 30 picks which will only further accelerate an already young and talented list.

Not a lot has gone right at Carlton this season. The major positive is Sam Walsh is a bonafide superstar in the making, if he isn't already. He will be a top five mid in the competition for years to come and is likely on track for his first All-Australian blazer.

Harry McKay is the other big positive. After years of showing glimpses, he has become a dominant key forward, claiming the Coleman Medal. McKay will give defenders headaches for years to come.

Finally, the potential for the greatest coach of the modern era to arrive this off-season must have Blues fans somewhat optimistic.

Max King looks every inch the player the club hopes he'll be, and he's been re-signed until 2026. After a tough first half of the season, he has responded in style.

Jack Steele is not only a superstar, he's probably a top five midfielder in the competition now and surely in line for another All-Australian jacket. The club put games into Ryan Byrnes, Jack Bytel, Leo Connelly and Cooper Sharman, who all look capable at AFL level.

The injuries this season were possibly the worst in the AFL, and the fixture arguably the hardest. The Saints bounced back from some humiliating losses early to somehow end up in finals contention, although they fell short.

The Moorabbin redevelopment well underway and a record membership tally are bonuses from a disappointing campaign.

A tough year, however the Tigers are still contenders. Make no mistake, they'll bounce back.

A bad year with injuries, perhaps it was the personnel who were injured that hurt the most. Getting key players back will almost feel like new draftees. The development of youngsters like Callum Coleman-Jones and Hugo Ralphsmith can only be viewed as positives.

Perhaps the biggest plus however is Shai Bolton re-signing, he'll be the X-factor the club builds around for the long term. Jack Graham emerging as potential future captain is another reason for optimism at Tigerland.

After this season, it's clear that Fremantle has a great coach in Justin Longmuir. Under his watch, youngsters such as Andrew Brayshaw, Sean Darcy and Hayden Young all look like future superstars of the competition.

Though the Dockers may lose Adam Cerra, they will likely get great compensation to continue to bolster an already impressive young squad. In recent weeks, Freo have taken some big scalps, beating the Tigers and fierce rivals West Coast, signalling their upwards trajectory.

While injuries have hurt the Eagles, like several others on this list, they have still got the squad to contend. Another year into Oscar Allen will see him well placed to take the competition by storm next season.

Nic Naitanui is still going as well as ever, while Willie Rioli coming back after almost two very long years is a feel good story for the club in a tough season.

Perhaps the biggest upside for West Coast fans, and all WA people for that matter, is that the AFL Grand Final is a strong chance to be played in Perth.