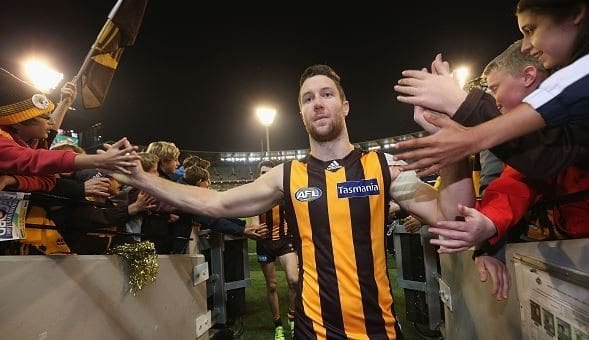 Premiership Hawk James Frawley has announced his retirement from the game.

The 32-year old calls time after 239 games, including 100 for the Hawthorn after crossing from Melbourne at the end of 2014.

Frawley won a premiership with Hawthorn in his first season at the club in 2015 and was an All Australian as a Demon in 2010.

The defender thanked those closest to him for helping support his AFL career.

“I would like to thank my beautiful wife, Kasey, for being by my side and riding every high and low of the past 10 years with me,” Frawley told hawthornfc.com.au.

“My little boy Sonny for being an absolute joy over the last year.

“I would especially like to thank all my teammates over the journey, I have made so many friendships that will last way beyond football and for that I am so thankful."

“My family and friends have been there since day one, particularly my parents.

“The coaching and support staff for their unwavering support of me over my time at both Hawthorn and Melbourne Football Clubs.

“I am looking forward to the next chapter with my family, whatever that may bring."

Hawthorn coach Alastair Clarkson commended Frawley for his contributions to the club.

“Chip has been a significant contributor for our club over the past six seasons, following his recruitment from Melbourne Football Club at the end of 2014,” Clarkson said.

“His capacity to negate the influence of the opposition's most potent key forwards was clearly evident in our 2015 premiership campaign where he limited the influence of Taylor Walker (Adel), Matthew Pavlich (Frem) and Josh Kennedy (WCE) in successive weeks.

“Across his career, he has been reliable and disciplined, using his speed and strength to great effect. His country background and humility endeared him to all, especially his teammates, many of whom will be lifelong mates.

“Kasey has been a great support on that journey and together with young Sonny, they look forward to the adventures ahead.  We thank Chip for his service to the game across two clubs and acknowledge and applaud his sacrifice and commitment to the game for over a decade.”