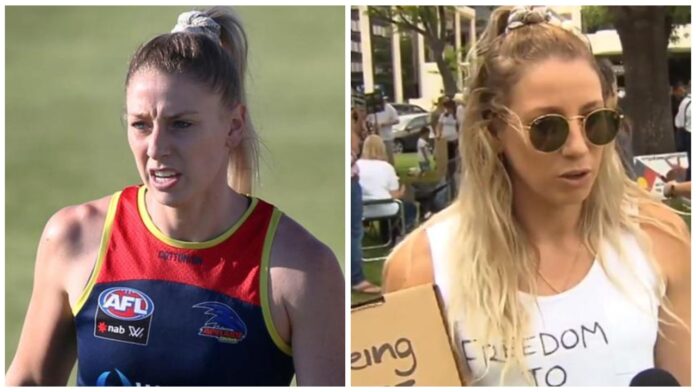 Deni Varnhagen's AFLW future appears to be over after the 29-year-old and the Adelaide Football Club came to the mutual decision to move the defender onto the inactive list effective immediately.

The registered nurse has recently made news for her vaccine stance, with the decorated Crow holding a view that obtaining immunization should be a preference and not a league-wide mandate.

Varnhagen was captured by cameras on Tuesday protesting in Adelaide's streets along with other members of the South Australian nursing community.

Given the 2017 and 2019 premiership player has long stated that she has no desire to receive any form of vaccine, Varnhagen will no longer be able to take part in the competition that is set to commence in January of next year.

With this in mind, it appears a certainty that the South Australian will miss the league's cut-off period for double vaccinations which has been set for December 17.

In a statement released by the West Lakes club on Friday morning, Crows CEO Tim Silvers claimed that as Varnhagen was not willing to concede ground, the current outcome was inevitable.

“The AFL’s initial vaccination deadline is still a fortnight away however, Deni has made it well known she is against vaccination in this instance,” Silvers said.

“We have a team-first approach and the timing of this decision has been made in the best interests of the team and its preparation for the upcoming season.

“Our Club supports the League’s policy and we strongly encourage people to be vaccinated for the benefit of community health and safety.

“We would like to acknowledge and thank Deni for the significant contribution she has made to our women’s program over the past five seasons.”

While the Crows will be without the 31-gamer for future campaigns, the club will be seeking redemption for their grand final loss suffered at home to Brisbane in April of this year.

The fixture for the 2022 season is still to be released, however, confirmation has been made that the 14-team competition will commence again the new year.