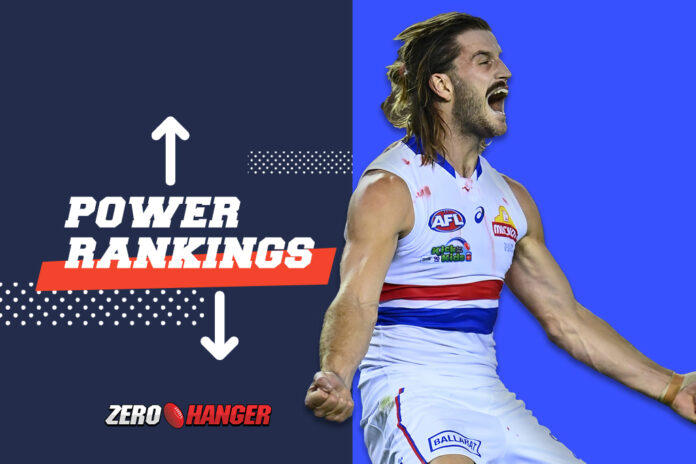 Round 3 was one of the most extraordinary rounds in recent history, with a plethora of twists and turns shaking up the 2021 AFL season.

With this, here is where each club sits three rounds into the season.

The Doggies are arguably the most in-form squad in the competition at the moment.

Nevertheless, Luke Beveridge's team are looking the real deal in season 2021, and continued to flex their muscles with a 128-point mauling of the beleaguered Kangaroos on Good Friday.

Bemoaned forward Josh Bruce had the game of his life, booting ten majors, whilst the usual suspects in the form of Bailey Smith, Marcus Bontempelli and new Bulldog Adam Treloar all ran riot. Going off their performances in the first three rounds, it's hard to discount the Doggies as a genuine contender for the flag.

The Tigers had a rare shellacking at the hands of the young Swans on Saturday afternoon, with many of their players showing a lack of desire to work for the footy.

The gaping void that has been left by Nick Vlastuin was exposed by the Swans attacking style, with the forwards ripping the Tigers defence to pieces.

With Dion Prestia expected to be out for a month as well as the aforementioned Vlastuin, Richmond's trip to Adelaide to take on the Power just very difficult - if it wasn't already.

After coming off a heart-breaking loss against the Doggies last week, the Eagles had a stern test against the Power under the lights at Optus Stadium on Saturday night.

With many expecting an arm-wrestle of an encounter, Adam Simpson's boys exceeded expectations with an emphatic 37-point win over Port. The tireless Andrew Gaff was in electric form, racking up 36 touches, whilst twin towers Josh Kennedy and Jack Darling combining with four and three majors respectively.

Off the back of this classy performance, any doubts of the Eagles' true quality should be quashed.

Port Adelaide had a difficult week in Perth, going down to Adam Simpson's side in a performance that would've disappointed Power fans after such a promising start to the year.

The Eagles outplayed them with their kick-mark game-style that is, on it's day, incredibly tough to combat. Despite this, Port fans shouldn't be overly worried about the loss, and have a chance to get back on the winners list on Friday night against Richmond.

Should they come away with the biscuits then there should be no question over the Power being favourites for the flag.

Who could have seen this coming? This young Sydney side has blown away all fans - both die-hard Bloods and neutrals alike - with their scintillating and silky style of play.

They outplayed and outworked the reigning premiers in Richmond at 'G, with seven of the 22 players not having played at the home of footy in their career.

There is a huge buzz around these Swans, and with finals footy a genuine possibility for John Longmire's boys, could they now push on and prove themselves as genuine contenders?

In a season that many have flagged as do-or-die for coach Simon Goodwin, his Demons have stepped up so far in 2021. Melbourne haven't had this good a start to a season for a while, and all the signs are pointing to a top-eight finish should they keep motoring on.

Their defensive structure looks in top knick with the consistent performers of Steven May and Jake Lever, whilst youngster Kysaiah Pickett has had an incredible start to his campaign.

The next few weeks could be season-defining for the Dees, with matches against the Cats, Hawks and Tigers bound to give fans a genuine insight into where the club is at in season 2021.

The Cats faced the Hawks in an Easter Monday blockbuster, with all eyes on Isaac Smith as he faced his former side.

Despite a late charge from the hungry Hawks, Chris Scott's side survived and went on to secure their second win in a row. Cam Guthrie couldn't stay away from the ball all day, racking up 43 disposals, whilst Mitch Duncan and Tom Stewart were in good form as well.

With their next three games against the resurgent Demons, North Melbourne and West Coast, Geelong will be aiming to keep jetting up the table and making an impression on the top four.

The Lions pulled off a surreal one-point victory on Thursday night against the Pies, with Zac Bailey slotting a goal after the siren to secure Brisbane's first win of the year.

Similar to their match against the Cats, the Lions weathered the storm for three quarters to come from behind in the last, this time snatching the win.

Chris Fagan's side have a stern test against the Doggies this week and would be in fantastic stead if they managed to pinch the four points in that encounter.

Collingwood fans were left shattered after their encounter with Brisbane on Thursday night, painfully going down by a kick after the siren after looking like they had the win wrapped up at certain points throughout the game.

Josh Daicos looked menacing all evening, whilst Scott Pendlebury had a good performance in midfield, although in the end it wasn't enough.

The Pies have a good chance to pick up four points next week against the out-of-form Giants and get their season back on track.

The Crows returned to the winners list this weekend with a hard-fought win over Gold Coast at Adelaide Oval.

Taylor Walker continued his revival with a bag of six goals, whilst their midfield once again showed their class, led by captain Rory Sloane.

A side that many expected to be nailed on for a bottom two finish, the Crows have surpassed all expectations with their brand of footy, and coach Matthew Nicks will be hoping his side can keep kicking on and reinforce their position over the course of the year.

The Blues finally got the four points in season 2021, with an emphatic 45-point win as they put the Dockers to the sword.

Harry McKay had arguably his best game in a Blues jumper, kicking seven majors, whilst Sam Walsh, Patrick Cripps and Lachie Fogarty all had a great run-out too.

However, the next few weeks for David Teague's side will be tough, with match-ups against the Suns, Power and Lions surely setting the tone for the rest of their season.

Get your Easter Monday off on the right note, with all the goals from @harrymckay_'s career-best showing. 🧙‍♂️ pic.twitter.com/JSqBiYwwLZ

The Hawks had an admirable game against the Cats, going down narrowly despite coming from five goals down at three quarter time.

Defender Changkuoth Jiath continued to wow spectators with his performance down back. Despite this, the Hawks will be wanting to have some real reward for the progress they've made this year, and have the chance to do so against the Dockers next week in Perth.

After a shambolic opening two rounds, the Bombers rocked the footballing world with an absolute drubbing of finals hopefuls St. Kilda to the tune of 75 points.

Ben Rutten's side, reinvigorated by their youthful lineup, outworked the Saints and showcased what the future might look like for the Bomber faithful.

However, the next few weeks are looking rough for the Bombers, especially next week as they come up against the rampaging Swans.

Some of the best from the Marvel pressure cooker 🥵

The Saints' start to the year got a whole lot worse as they dished up a pathetic showing against an Essendon side who were seemingly at their worst.

Brad Hill and Zak Jones were especially poor, however co-captain Jack Steele put up an admirable display racking up 35 touches and a goal.

Their run gets incredibly tough as of next week, with games against the Eagles, Richmond and Port Adelaide coming up that could see Brett Ratten's side with one win from their first six games.

The Suns went down narrowly to the Crows in Adelaide despite leading for large sections of the match.

Youngster Noah Anderson had a stellar game, whilst Ben King kicked a bag of four, but it wasn't enough to secure the four points.

Stuart Dew's boys have a tough match-up next week against the Blues, but will be confident that they can get the wood over David Teague's boys at home.

Fremantle were insipid against the Blues, with the hype from their emphatic win over the Giants a week earlier quickly quashed by a hungry Carlton side.

Next week is a prime opportunity to get back on the winners list however, with a Sunday afternoon clash against the Hawks at home potentially taking them to two wins from four - an admirable record considering the youthfulness of the side.

Things went from bad to worse for the Giants against the Demons, as they went down by 34 points to the in-form Demons.

The worst part was an ankle injury to captain Stephen Coniglio, who takes his place on the sideline with fellow injured Giants Lachie Whitfield, Braydon Preuss, Adam Kennedy and Jesse Hogan.

The outlook for their next few weeks is grim, with matches against the Pies, Swans and Doggies meaning that they could very well be 0-6.

The struggling Kangaroos were absolutely torn apart by the Bulldogs, with the plight of the side exposed even more.

Despite somewhat being in the contest for the first quarter and a bit, the Roos might as well not have turned up to the second half, as they conceded 16 goals to go down by 128 points.

The outlook is grim, with North looking like an easy four points for just about any team they come up against. It is fair to say David Noble has a mountain of work to do with his side.