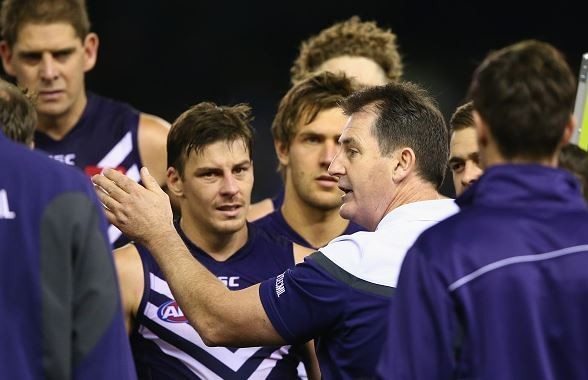 After sewing up top spot, Fremantle coach Ross Lyon announced yesterday that he plans to ask the AFL for approval to rest players for next week’s clash against the Power and the League should have no hesitation in approving his request.

The AFL introduced a new rule in 2013, after Ross Lyon rested 11 players in the last round after his side had cemented a spot in the top four.

The Dockers then beat Geelong at Simonds Stadium the following week in the qualifying final and went on to reach the Grand Final.

The amended rule states that a team must perform on one’s merits, which reads:

“(It) means at all times to perform honestly and to the best of one’s ability in the pursuit only of legitimate competitive objectives.

Lyon said that there are several players in his side who are in need of a rest to freshen up for finals.

“We’ve earned that opportunity but that sits within the rules of the AFL,” Lyon said post-match.

“We are fatigued. There does need to be management of our players. Certainly there’s no impact on any other teams in the competition.

“It doesn’t impact Port and we can’t improve or lessen our position. So clearly it’s an opportunity.

There should be no problem with resting players to ensure they are at peak fitness heading into finals. Geelong did it in round 15 against Brisbane in 2009. Geelong had lost one game all season leading in to the game, but lost to the Lions by 43 points in a huge upset.

The Cats rested several players to ensure they were ready to go come finals time and the plan worked, as they would later go on to win the flag, their second in three years.

It is absolutely the prerogative of the club and the coaches to be able to do whatever they want with their list, including making their changes to the side each week.

Obviously, tanking and purposely losing in order to obtain a better draft selection is totally unacceptable and the AFL has shown in the past that it will not accept that behaviour.

However, in this instance, the League should have nothing wrong with what Ross Lyon intends to do. It is simply good man management and he should be applauded for doing whatever he can to help Fremantle win its first ever AFL premiership.

There is a slight side note to this debate however, with Fremantle’s WAFL affiliate, Peel, playing in the first week of the finals next week. The team could be decimated if Lyon makes wholesale change.

This will have to be taken into consideration when choosing his team for next week’s match, but each player on Fremantle’s list is first and foremost contracted to play for the Dockers. But Lyon said he would be respectful to Peel’s finals campaign as well.

“That would clearly impact them as well. They’re an important stakeholder of ours. It’s been a really productive alignment. It’s been beneficial for both parties.

“We see ourselves as one. But clearly the AFL would override at this stage. But we would certainly be respectful of that.”