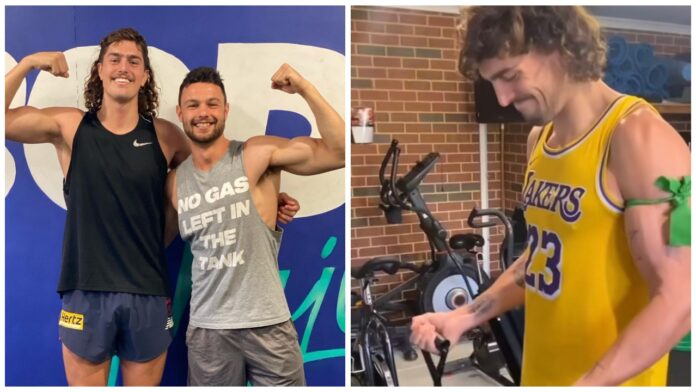 Luke Jackson's transformation from boy to man in 2021 was without a doubt one of the driving forces behind Melbourne's dominant premiership win.

The Western Australian had put in the work in the pre-season and while it resulted in him having a terrific season, the great pay-off came in the third quarter of the Grand Final.

Jackson played a crucial role in the turning of the game in Melbourne's favour in a quarter Demons fans will never forget.

Demons fans owe a lot of thanks to the man behind the scenes of Jackson's impressive 2021 pre-season, and luckily for Dees fans, he's at it again.

Gerard Majic of Body Majic has again been working with Jackson in a bid to help the young ruckman take the next step forward.

Majic said that Jackson's improvement physically in the previous off-season had Melbourne stunned and thrilled with the progress of their future number one ruck.

"He came in last pre-season as well and that was his big improvement," Majic told Zero Hanger.

"He put on 7kg in the nine weeks that we trained. When he went back, Melbourne were like 'what did you do with him? This is great'.

"He went from a skinny first-year player to being able to compete with all the bigger bodies."

Majic said that the aim with Jackson's program heading into 2022 wasn't too different to last year with size still a focus.

"He said that helped him so much last year and he just wants to get that little bit bigger again," Majic said.

"We did a bit more of a weights training program, he's done lots of running and explosive stuff as well. He's put on another three and a bit kilos so he's even bigger and stronger again."

Majic has had a number of AFL players utilise his programs with Collingwood's Trey Ruscoe, Hawthorn's Denver Grainger-Barass and a number of Fremantle stars coming through the door as well.

"I've had Luke (Jackson), Trey (Ruscoe) and pretty much most of the Freo team as well as Denver Grainger-Barass," Majic said.

"They (players) have like eight to 10 weeks completely off any sort of training or running program that the club gives them. The only point in the year a player can change their body composition to put on a bit of size is the off-season."