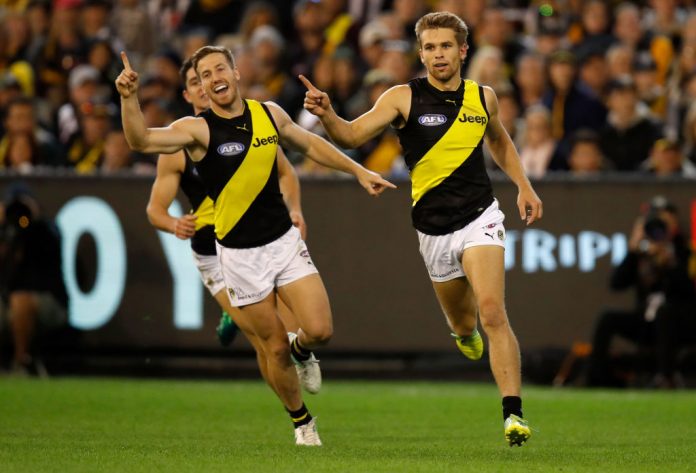 The 26-year old sustained the injury during his club’s 74-point win over the Suns on Sunday.

“First quarter, he flagged a bit of an issue with his ankle after an incident in the game,” Richmond’s physical performance manager Peter Burge told the club website.

“He played out the game, but probably wasn’t able to run as well as he normally would. He was a little bit inhibited and came in yesterday limping.

“So we had that scanned and it came out that he’s got a partial syndesmosis sprain in his ankle.

“He went into some minor surgery this morning to put some reinforcement onto the ankle.

“Right now he’s probably going to miss the next two weeks and we’re going to prepare him for the first final.”

Meanwhile, gun forward Dan Butler will also miss the next two weeks after going in for the same procedure as Lambert.

“He’d been progressing and building his speed and running about 95 per cent, but still with a bit of a limp and still not full power,” Burge said of Butler.

“So last Friday he went in and had the same minor procedure that Kane had this morning, which means he’s going to miss probably the next two games.

“We’re preparing him for the first final at this stage … we’ll get a much better result with this minor surgery.

“We’ll start him running later this week and build his speed.”

The Tigers’ run home includes clashes with Essendon and the Western Bulldogs both at the MCG.