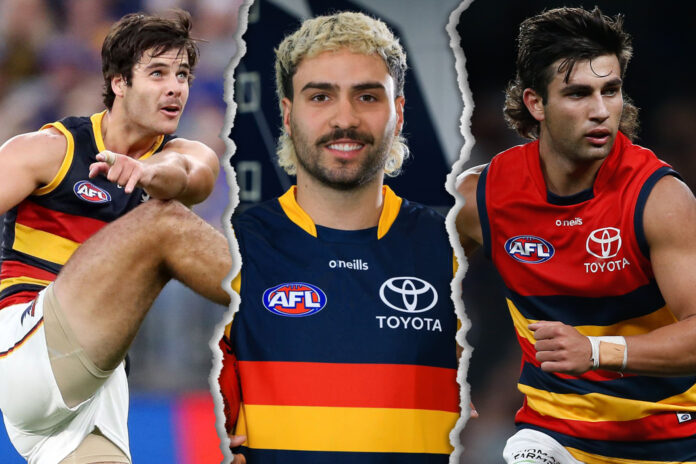 In securing a deal for Gold Coast's Izak Rankine, Adelaide have built themselves a formidable forward unit to match a deep, high-potential list.

Rankine's partnership with last year's Pick 6 Josh Rachele will surely have Crows fans salivating, but it's not the only shrewd piece of list management Adelaide has made since their slide down the ladder.

As of Round 1 next year, the Crows will only have four players over 30 years of age on their roster — Taylor Walker, Rory Sloane, Brodie Smith and Paul Seedsman.

Finding leadership and experience within a young group isn't without risk, yet it's something Adelaide have been able to work with.

The remainder of Adelaide's list is filled out with high-end talent and youth with the potential to become solid AFL players. Their average player age of just 23.5 years is the lowest in the competition, with Hawthorn and North Melbourne just behind at 23.7 years average.

Even with the youngest playing group in the AFL, the Crows were able to win eight games in 2022, and should only do better in 2023.

Get excited about Adelaide's forward play

Rankine joins Adelaide after kicking 29 goals in 18 matches this year. He was drafted from West Adelaide as an exciting goalkicker but spent a lot of time in the midfield during the Under-18 Championships, so the Crows will likely rotate him through both positions.

Rachele kicked five goals in his first-ever AFL game, which is the kind of performance Rankine is capable of, too. He's a player with the ability to turn games around, whether it's through snapping goals on an angle or setting up teammates with his crafty disposal.

Pair that young group with Walker, who finished with 47 goals this year, and the super-consistent Shane McAdam, and coach Matthew Nicks has an electric front half to work with.

Since Adelaide fell to the bottom half of the ladder in 2018, the club has taken 17 picks in the National Draft. Their selection hasn't always been perfect, but it has been good enough to set the Crows up with a completely rebuilt list that can win games.

Harry Schoenberg, Sam Berry, and Jake Soligo were taken in consecutive years and have firmed into a rising midfield unit. Down back, the Crows have been clever - taking Jordan Butts and Nick Murray in the Rookie Draft and selecting Josh Worrell at Pick 28 in 2019.

Their low-cost backline mirrors the successes of other bargain pickups in Ben Keays and McAdam. Both have provided maturity and played their roles with valuable consistency.

Last year's trade for Jordan Dawson turned out to be a good one, with the half-back nearly finding himself in an All-Australian blazer this season. He also slotted that goal against arch-enemies Port Adelaide.

The Crows currently hold Pick 23 and 46, which doesn't leave list manager Justin Reid with much to work with after sending Pick 5 to Gold coast in the deal for Rankine.

Now begins the daunting task of developing what's already there into a team that can return to the heights of 2017's grand final run.

Adelaide will be a fun watch with players ready to break out and a new star acquired in Rankine.