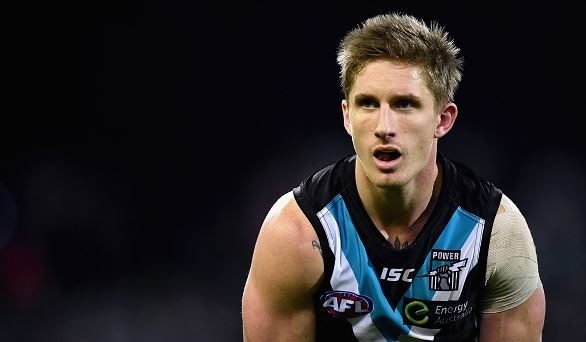 Hamish Hartlett has signed a new long term deal with the Power.

Several clubs were reportedly interested in luring Hartlett away from Alberton, but the defensive midfielder has re-committed for a further six years, tying him to Port Adelaide until at least the end of the 2021 season.

“I never wanted to go anywhere else,” Hartlett told the media on Wednesday.

“My family and friends are here in Adelaide and I’ve invested a lot of time in the club and vice-versa. I’m just really happy has offered me along term deal.

“I was pretty suprised and shocked to get offers from Victorian clubs. It’s a bit flattering but I always wanted to stay.”

The deal makes the 25-year-old the longest contracted player on the Power’s list.

Hartlett, who was recruited with pick No. 4 in the 2008 National Draft, has played 112 games, including 22 this season.