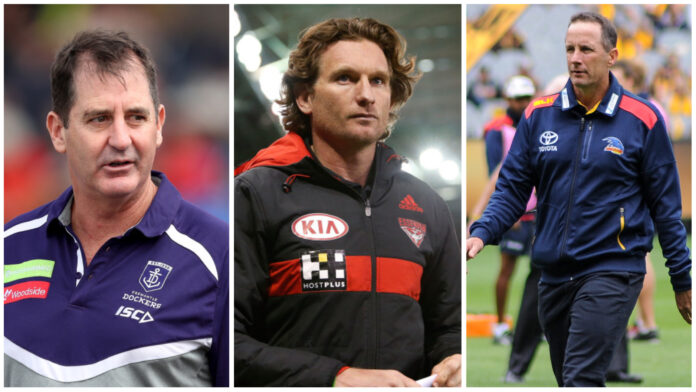 Essendon's search for a new coach has officially begun following the sacking of Ben Rutten on Sunday afternoon, with the former Bombers coach having spent just two seasons in the top job at Tullamarine.

Rutten's exit continues what has been a tumultuous decade for the club, with the Bombers now seeking an experienced coach to help put a stop to their graceless fall down the ladder.

Alastair Clarkson has now committed to North Melbourne, while the Giants are set to announce their new coach in the coming days, leaving Essendon, and those conducting an external review into the club, a difficult task to find their next coach.

With time not on their side to find a suitable candidate prior to the trade and draft period, Zero Hanger has had a look at who the most likely candidates are for the top job.

Should the Bombers be convinced to go down the experienced coach route, one name stands out among the dwindling field. Lyon has coached 305 games at AFL level, 121 at St Kilda, 184 at Fremantle, leading the Saints to grand final appearances in 2009 and 2010 and Freo in 2013.

The defensive guru left the Dockers in 2019 and fits the bill for what Essendon are after, having proven his ability to instil success at multiple clubs.

Lyon has remained tightlipped about his desire to return to a senior coaching position after settling into a media career.