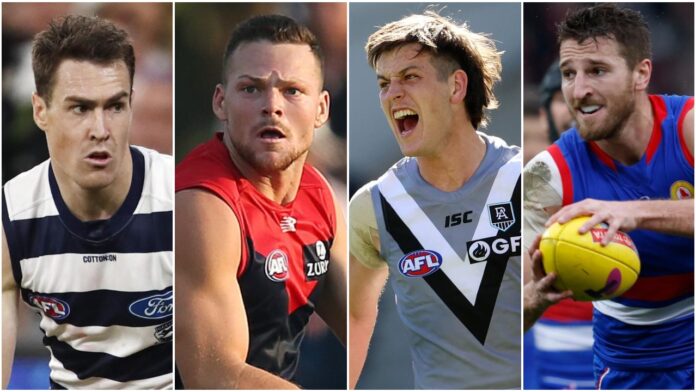 With finals footy starting to heat up we are now left with only four remaining teams, the Melbourne Demons, the Port Adelaide Power, the Geelong Cat, and the Western Bulldogs.

After the Bulldogs and Lions provided us with one of the games of the season, excitement is starting to increase over who will win the premiership in 2021.

While Melbourne and Port Adelaide are looking like the teams to beat, all four sides have played at the level of winning any of the remaining matchups. Injuries, experience, history, and form all play an important role in who will be the eventual winner.

Will the Demons break the longest grand finals drought in football? Will Geelong break their finals hoodoo since Hawthorn broke the Kennett Curse? Will the Bulldogs win another premiership from outside the top four? or Will Port Adelaide finally deliver on all the promise they have been showing over the past few seasons?

We look at two reasons why each of the remaining teams can and can't win the 2021 AFL premiership trophy.

Over the course of the season, the Demons have overcome multiple challenges and stormed their way to the top of the ladder. Many in the media had pegged Melbourne for a fringe finals team at the beginning of the season. Even Melbourne's biggest believers were only predicting a top-eight finish. No one expected them to be as dominant as they have been.

Only their coach Simon Goodwin predicted such a feat for the club, who saw a bounce-back season for the Demons earlier in March this year. When speaking to AFL media, Goodwin was optimistic about the direction of his club.

"As I said last year, the foundations have been laid as a club over a period of time now. I stand by that. Our expectations are a lot higher. We don't want to just play finals. We want to play significant finals and win significant finals," he said.

"We need to put ourselves into a top-four position to give ourselves the best chance to win the ultimate. That's what we're setting out to do."

"The foundations have been laid and I think we've had the summer that gives us the capacity to do that. We're setting ourselves to go about it."

Starting the year strong, they stormed their way to nine consecutive victories with a 9-0 record. They then narrowly lost to Adelaide by one point in Round 10, which prompted some doubt from the media.

They had their ups and downs throughout the middle rounds but finished the season strong to solidify their spot as the best team throughout the home and away season.

For most teams, winning the minor premiership is an excellent achievement that leads to varied finals success.

For Melbourne however, history is now looking favourable for them after their top-of-the-table finish.

One of footy's true champions thinks his club is finally ready to exorcise their Demons this September.

Having played in Melbourne's last Premiership back in 1964, Hassa Mann says it's time to pass the baton. @cstanaway #9News pic.twitter.com/nIWfprsKsx

Throughout their span in the AFL/VFL, the Demons have been the minor premiers in nine other seasons.

No other team has had the same level of success in converting excellent regular season form into the premiership. History would lead us to believe that Melbourne is extremely likely to make it to the grand final. Once they get there, the odds also suggest that the Demons could win their 13th premiership and end the league's longest premiership drought.

Melbourne commands the league's premier defense, holding their opponents to a league-best 65.6 points per game.

Headlined by All-Australian defenders Steven May and Jake Lever, Melbourne suffocate opposition forwards by minimising their impact around the ground. May normally locks down the opposition's best forward, while Lever floats between his opponent and being the spare man, leading to spoils and intercepts. The Demons created an AFL record in intercept marks, taking 19.9 per match. The pressure that the whole defensive unit creates has led to opposition scoring on just 35.3 percent of their forward 50 entries.

While leading the league in intercept marks, they also limit opposition marks inside 50. Throughout the season, their opponents have only completed 188 marks within the forward 50. No other club has limited opposition players to under 200 throughout that span.

Christian Salem has also had a career year in defence, not only improving on the defensive side of the ball but having elite ball use to propel the ball forward and move the ball out of defence. He was in contention and just missed out on selection in the All-Australian team himself.

Winning the minor premiership in the past 25 years

While Melbourne has had individual success when winning the minor premiership, it has been 57 years since that has occurred. Since then the league has expanded and regular-season dominance has begun being less important throughout September.

In particular, in the last 25 years, there have only been six teams that converted a top of ladder finish into a premiership win. While in the past decade, there has only been one.

Over 75% of the time, the top sides have been unsuccessful in being able to win both the regular season while obtaining grand final glory. With the expansion of the game and influx of talent, it has become increasingly difficult to maintain success throughout the entire year.

This demonstrates how the top spot has become a target for other clubs, with many teams unable to handle that pressure. Even the most dominant club in the past four years, Richmond, failed to make the grand final during their only minor premiership over their dynasty.

Melbourne sneaking ahead on the ladder in the last game of the season could end up costing them a chance of winning their 13th premiership if the past 25 years continue to repeat itself.

While Melbourne's defence, midfield and ruck are some of their biggest strengths, they are often unable to convert turnovers and forward opportunities into scoreboard pressure and insurmountable leads. The Demons were the fourth most inaccurate team in front of goals throughout the season. The only three below them were Fremantle, Adelaide, and Gold Coast, all of whom failed to make the top eight.

Melbourne averaged 12.3 goals and 12.3 behinds throughout the regular season. All the other sides left in the finals had over 52% goals to behinds. The accuracy of the remaining sides are as followed; Port Adelaide (12.5 goals and 10.5 behinds), Geelong (12 goals and 10.7 behinds), and Bulldogs 13 goals and 11.9 behinds).

This inaccuracy can even be seen in large victories, including their win in the qualifying final.  They managed to score 13.15 for the match. This resulted in a final score that was more flattering for their opponents than it should have been.

Throughout 2021, Melbourne has only lost four games and managed one draw. Here are the final scores for those matches (with Melbourne's score being first).

In three of those losses, the Demons inaccuracy cost the match, having more scoring shots than Adelaide, GWS, and Hawthorn. Against the Bulldogs they equaled their opponent's scoring shots, and their loss to Collingwood was the occurrence where they finished with less.

In high stakes close finals, inaccuracy in front of goal can be disastrous and could lead to an upset over the next two weeks. With a midfield and defense filled with talent, the Demons will always have plenty of opportunities to generate scoreboard pressure. Melbourne needs to hope that they kick straight over the next two weeks, otherwise, they could find themselves missing out on success in the last game in September.

Useless AFL Stats recently created this ladder based on the accuracy of each side. It optimises the inaccuracy issues of the Demons throughout 2021.