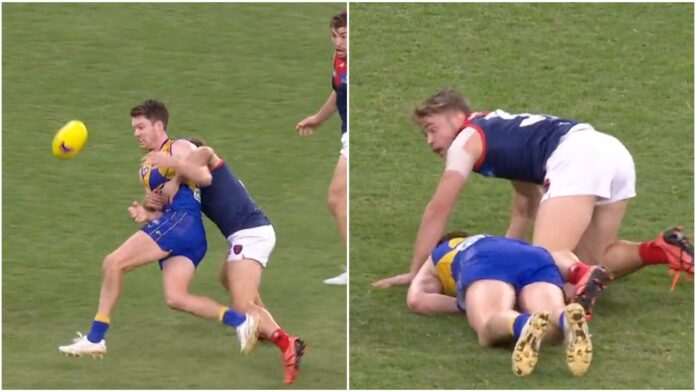 Demon Kade Chandler has been handed a two-game ban for a dangerous tackle on Eagle Luke Foley.

Chandler has been charged with rough conduct for the incident that occurred in the final quarter of Sunday night's affair at Optus Stadium.

Foley was tackled and unable to brace for the ground as Chandler had the defender's arms pinned, with Foley requiring subsequent assistance off the field.

The incident has been deemed as Careless Conduct, High Impact and High Contact, resulting in a two-match suspension.

Chandler can accept the charge with an early guilty plea or appeal the Match Review Officer's verdict, with a two-game suspension seeing Chandler miss matches against the Kangaroos and Dockers.

Meanwhile, West Coast forward Liam Ryan has been offered a one-game ban for his bump on Melbourne's Jake Bowey.

Ryan can accept the charge with an early guilty plea and will miss next week's clash with GWS on Sunday.

Eagle Jeremy McGovern has avoided suspension for his high hit on Melbourne's Jack Viney, with the MRO handing the veteran defender a $1000 fine.

The MRO charged McGovern with misconduct, with the sanction lowered from $1500 as a first offence.