ZERO HANGERNEWS, RUMORS & PLAYER MOVEMENTS
More
Home AFL News 2020 Champion Data predicts where your side is most likely to finish

As we enter round 15, Champion Data has released its predictions for where every club is most likely to finish at the end of the home and away season.

They have backed the Tigers in as a 33% chance to finish on top of the ladder, while the reigning premiers’ top four credentials are almost set in stone, where they are given a 77% likelihood to have the double chance.

Sydney is considered a 42% probability to finish first or second, while the Power have snuck into third and are considered a 56% chance to finish in the top four.

The Pies fall out of the four in favour of the Cats, and the Eagles tumble all the way down to sixth, but all three teams are considered over a 44% chance of finishing with the double chance.

Melbourne are not far below in seventh position and considered an outside but possible 35% chance of finishing in the four. Rest assured Dees fans, Champion Data pencils you in as an 85% chance of ending a 12-year finals drought.

The Giants scrape into finals despite being considered a better chance to finish ninth, with the Hawks backed as more likely to be on the outside looking in. 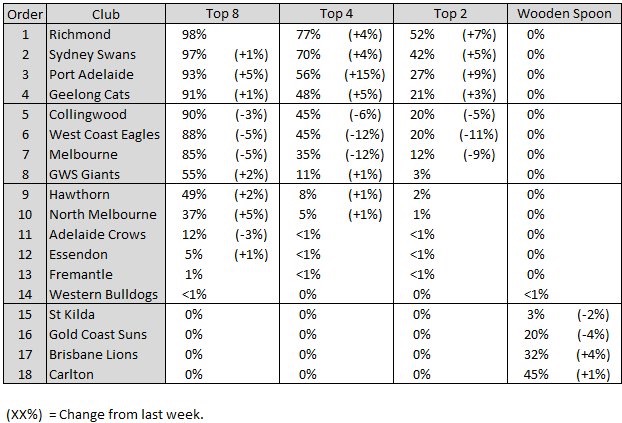 North Melbourne will drop out of the top eight according to Champion Data and are most likely to finish anywhere between ninth and 11th.

At the other end, the Blues are a 45% chance of bringing home the wooden spoon, with the Lions and Suns not far ahead of them.

Champion Data predicts that the Eagles will suffer the biggest drop over the next eight weeks, going from third to sixth, while the Cats’ rise from seventh to fourth is the biggest jump.