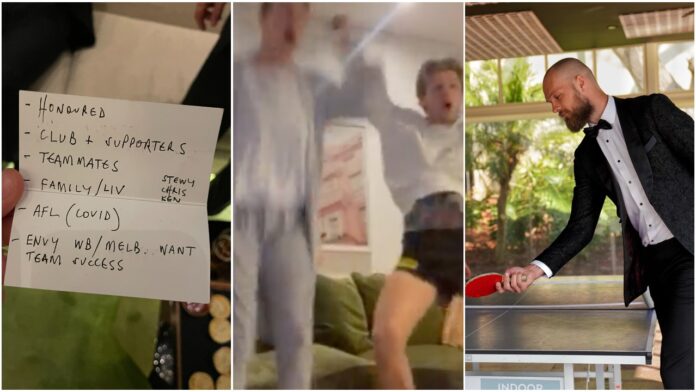 Another Brownlow night is done and dusted, with Port Adelaide star Ollie Wines claiming the crown for 2021 with a stunning 36 votes to his name.

The medal is the Power's first, with Wines' 2021 campaign amassing a record amount of votes to edge out the likes of Marcus Bontempelli, Clayton Oliver and Sam Walsh, all of who polled more than 30.

The evening was an enticing affair as the leaderboard was constantly shuffled until the final round of the night, with there to be plenty of emotion from the offset.

While several of the league's stars would have been worthy winners, there's no doubt Wines was the most deserving.

⚡️ First #Brownlow Medallist in @PAFC history
🏅 Record-equalling 36 votes
💪 Polled in a record 16 games, including 11 of the last 12

Cheers to you, Ollie 🍻 pic.twitter.com/h2YEJWzOgz

Wines' sister Maddie was among those celebrating the midfielder's win, and did so in style.

And soon came the aftermath of emotion and intrigue into Wines' win and speech, which had some help from Power football boss Chris Davies.

Ollie Wines’ mum was happy to tell recruiters in the bar after the 2012 draft that @melbournefc had overlooked a Brownlow medalist… She was right! A worthy winner. @FOXFOOTY #BrownlowMedal

Another year like never before, those in attendance were scattered across the country to celebrate the AFL's 'night of nights', and were preparing for the occasional a little differently.

This is one way to prep for the Brownlow… 😅 #GiveEmHell pic.twitter.com/0Fk8wiaeiQ

Ready for the #Brownlow 🏅🐶 pic.twitter.com/iTH7Ycfszl

No rest in the parenting game 🚫💤 #Brownlow pic.twitter.com/ieRzWnbBR9

And of course, statistician magician Swamp was at his best once again...