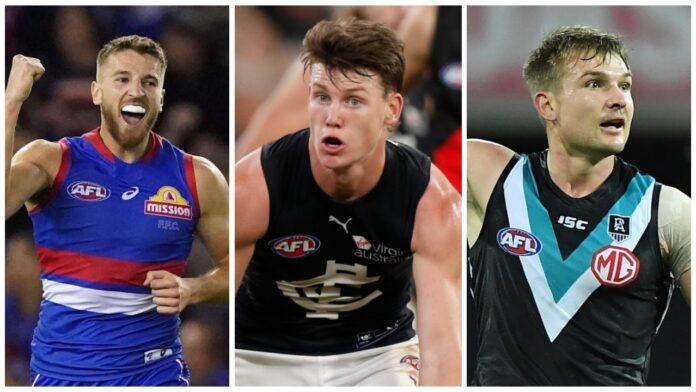 The nominees for the AFLPA MVP Awards have been announced and there are a few surprise exclusions.

The awards are a two stage process with players nominating their teammates in stage one before players voting on competition-wide candidates in stage two.

As well as the AFLPA MVP, players also vote for Most Courageous, Best First Year Player and Best Captain.

With the nominees from each club now revealed, there have been a few surprise omissions.

In a sign of how strong the Demons have performed this year, skipper Max Gawn was not one of Melbourne's nominees for the main award.

Although destined to be the All-Australian ruckman for a fifth year, Gawn missed out as Steven May, Clayton Oliver and Christian Petracca took out the most votes.

Jake Stringer also missed out on nomination from Essendon despite his electric run of form., which saw him land in the All-Australian squad of 40. Zach Merrett, Darcy Parish and  most surprisingly Jayden Laverde were all favoured in the MVP voting ahead of the 27-year-old.

Travis Boak was snubbed for the second time in a week after missing on the All-Australian squad earlier this week. Aliir Aliir, Karl Amon and Ollie Wines were all voted ahead of the Port veteran.

Players will now vote from the nominees in the second stage but cannot vote for their teammates. The winners to be announced next Thursday night.