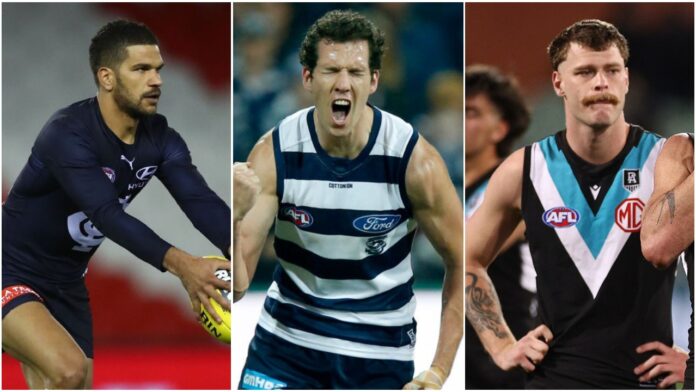 It was another frantic week in the AFL trade circles, with more clubs officially entering their off-season and beginning to re-shape their lists for 2022.

The Swans, Crows, Magpies and Blues were among the mix of clubs in the headlines over the past week in what has been a busy period of trade and free agency news and rumours.

Restricted free-agent George Hewett is set to trade Moore Park for Princes Park in 2022, with The Herald Sun reporting that the midfielder is set to ink a four-year contract with Carlton.

Hewett, 25, compiled 120-games with Sydney after making his debut in Round 1 of 2016, but given the Swans' salary cap squeeze, the SCG-based side are said to be near certainties not to match Carlton's offer.

According to Jon Ralph, the South Australian is expected to earn in the vicinity of $450,000 per season at his new home and will do so while offering the club's incoming coach some much-needed grunt in the middle of the park.

READ MORE: Hewett to link up with Carlton

Port Adelaide ruckman Peter Ladhams is reportedly set to assess his options this off-season, according to The Herald Sun.

Ladhams has been a viable asset to the Power across the course of the past two seasons, sharing the ruck workload with first-string tall Scott Lycett while also featuring as a forward target.

The Power currently boast an exciting crop of key forwards that placed Ladhams outside of Ken Hinkley's preferred side throughout 2021, with the utility being limited to just the 17 appearances for the season.

Both the Lions and Suns have reportedly thrown their hat in the ring for ousted Blues big man Levi Casboult.

The 31-year-old was told by Carlton last month that his services were no longer required at Princes Park with speculation mounting over whether the tall will press on with his playing career or call it a day.

There was also talk in August that Casboult had interest from Stuart Dew's side, however the latest news from The Herald Sun is that the Lions have shown desire to secure his services too.

Sam Petrevski-Seton has reportedly told Carlton of his desire to be traded to the West Coast Eagles, per AFL Media's Riley Beveridge.

Beveridge initially tweeted that the 23-year-old was keen to play for either side located in Perth, but updated his findings five-minutes later by claiming that Petrevski-Seton would prefer to be an Eagle rather than a Docker next season.

South Australian born Swan Jordan Dawson has announced his preference to be traded to the Adelaide Crows this off-season.

Dawson has played 64-games in a red and white guernsey since being selected with the 56th pick of the 2015 draft, but due to the Swans' salary cap squeeze, the 24-year-old has opted for a move home in an effort to secure a contract befitting his skillset.

The news of Sturt product's shift was first reported by AFL Media's Mitch Cleary via a Tuesday afternoon tweet.

Brisbane are eyeing Geelong's Darcy Fort to add some much-needed depth to their ruck stocks, according to The Age's Daniel Cherny.

A second straight-sets finals exit in three years has the Lions desperate to remain inside their premiership window.

After bringing in big-name recruits Joe Daniher and Lachie Neale in recent years, Brisbane are now looking to be thrifty with their trade targets, with rival clubs are reportedly aware of Brisbane's desire for another ready-made ruck option at the trade table.

Dockers on the verge of landing Cat, eyeing tall forwards

Fremantle's off-season planning has become a little clearer, with captain Nat Fyfe revealing the Dockers will look to inject some young tall-forward talent through the draft, while a move for Cats speedster Jordan Clark looks all but done.

Fyfe has ventured forward as an attacking target in Justin Longmuir's side over the course of the past several seasons as he looks to share the workload with a promising midfield group.

The Blues have been seen as the front-runners to acquire Cerra's services this off-season, with the 21-year-old formally requesting a move back to Victoria last month.

Now, as per Morris' report, the gun midfielder is expected to officially request a move to Ikon Park as early as next week.

In-demand Dog to remain at the Kennel

Midfielder Josh Dunkley is set to stay at the Western Bulldogs beyond the end of this season, with manager Liam Pickering saying he expects his client to sign an extension with the Grand Finalists.

Speaking on the Real Talk With Beno podcast, Pickering said Dunkley is set to recommit to the Bulldogs despite being contracted until the end of 2022, with the renowned agent believing an extension is not far away.

Out-of-favour Melbourne forward Sam Weideman will remain with the Demons past 2021.

The 24-year-old has signed a new two-year deal with Melbourne despite strong interest from rivals.

Two more years will see Weideman remain with the club until the end of the 2023 season, taking him to free agency.

FULL STORY: Weideman waves off rival interest to sign on with Melbourne

Cats big man Nathan Kreuger has told the club that he wishes to explore other options in trade period 2021, with a trade to Collingwood expected to land.

The forward was linked with a move to St Kilda recently as well as to the Magpies, however, according to The Age's Peter Ryan and Jon Pierik, it is only now that Kreuger has given the club a definite answer over his future.

Geelong midfielder Quinton Narkle has signed a one-year contract extension with the Cats for next season.

The 23-year-old has had his future highly speculated throughout this season, with links to Fremantle and Richmond placing some questions over Narkle's tenure at Kardinia Park.

Now the crafty Cat has signed an extension to remain in the hoops for a further 12 months.

Axed Giant Sam Reid has confirmed discussions to land an AFL lifeline have begun, however the veteran remains grounded in his search to join a third club.

Reid was among four Greater Western Sydney players not to be offered a new deal for the 2022 season last week, ending a remarkable stint with the club.

The list call was the third time the Giants have cut Reid from their squad over the course of his career, having first joined GWS from the Western Bulldogs a decade ago.

Hawthorn forwards Tim O'Brien and Oliver Hanrahan face an anxious waiting game, with both players out-of-contract for next season with the Hawks yet to make a decision on their future.

High-flying forward O'Brien is eligible for free agency and has been a mainstay in the Hawks side in 2021, playing 19 games.

FULL STORY: Hawks pair yet to sign on dotted line

Matthew Lloyd is of the belief that a move to the Gold Coast would benefit both the fledgling Suns and underutilized Bulldog Mitch Wallis.

The three-time Coleman Medalist stated that the Pups' vice-captain would serve Stuart Dew's list across multiple areas and cited his ability to aid the development of younger Bulldogs as a hallmark of his quality.

Port Adelaide ruck-forward Peter Ladhams is on the lookout for a new home after being told by the Power that he should consider a move elsewhere this trade period.

The 23-year-old is contracted for next year, but is a victim of a crowded Port forward-line.

These five clubs may consider making a move for the Norwood product.

Speaking to SEN Whateley, reporter Tom Morris revealed the Kangaroos are don't have contracts for next year and are facing to wait on their future.

READ MORE: Trio of Kangaroos set to wait on future

Following former Saint Luke Dunstan's revealing interview about the end of his tenure at Moorabbin, an AFL great has raised a new landing spot for the 26-year-old.

Dunstan, who played 116 games for the Saints, was not offered a contract for 2022 despite a seemingly impressive season in which he finished Sunday's Brownlow count as St Kilda's second highest vote-getter.

Should Dunstan remain in the AFL, Gerard Healy has proposed Essendon as a possible destination. Speaking on Sportsday, Healy suggested that the Bombers, who were handed a 49-point loss in the first week of finals, should look to Dunstan to boost their stocks in 2022.

The Gold Coast Suns are fielding trade calls for their first selection in the 2021 national draft, with Richmond and Adelaide among the clubs interested in trading up the draft order.

The Suns are open to dealing the No. 3 pick, with the intention of moving down the first-round order and securing multiple selections.