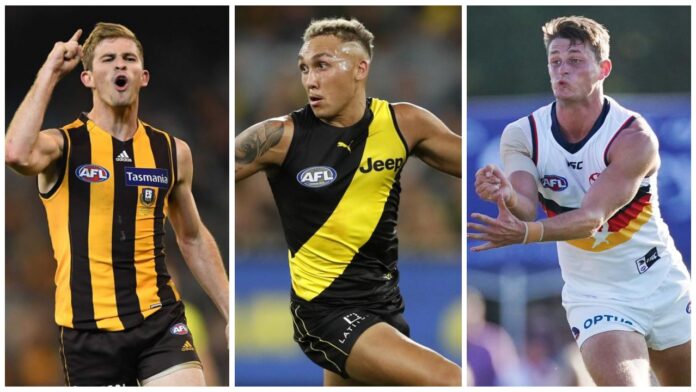 Despite it only being July, AFL trade news and rumours are heating up ahead of the 2021 exchange period.

In the past week, Geelong, Hawthorn and Adelaide have been in the trade spotlight, among several other sides already preparing list management calls for the upcoming trade period.

Essendon are set for another busy off-season, with experienced key forwards reportedly in their sights.

The Bombers have been arguably the most impressive side of the 2021 season, with their young, exciting list going against pre-season expectations as they currently sit in the frame for a finals place.

Cornes: Crows should be open to trading young forward

Port Adelaide champion Kane Cornes has questioned Adelaide forward Darcy Fogarty's position at West Lakes, believing the young forward is at a "crossroads" with his club.

“Selection (at Adelaide) is fascinating to me,” Cornes said on SEN SA.

“How Darcy Fogarty isn’t in this team is an indictment on Darcy himself...when you’re crying out for options forward of the ball and the team is crying out for some aggression and some competitiveness, for someone who can kick straight – they kicked 2.9."

The 23-year-old has played 24 games for the Power since making his debut in 2019, becoming a formidable option to pair with first-string ruck Scott Lycett.

Bulldogs midfielder could be on the way out

Western Bulldogs midfielder Patrick Lipinski could be set to leave the kennel in pursuit of greater opportunities at AFL level.

Lipinski has been linked with a possible move from the Dogs all season with the young midfielder struggling to force his way into the Bulldogs elite midfield group.

Geelong and Gold Coast have been linked to out-of-contract Hawk Oliver Hanrahan.

As reported by Fox Sports' David Zita, the Cats and Suns have previously "asked the question" in regards to the 22-year-old's situation at Hawthorn.

Update given for Cats quintet

Despite a recent re-signing spree, Geelong remain to have a bevy of out-of-contract key names that the Cats will be looking to lock away for the future.

Headlining the list is gun midfielder Cam Guthrie, who is relishing a dominant role in Chris Scott's engine room in 2021 off the back of a maiden All-Australian campaign.

Veteran Crows on the table

Sam McClure and Daniel Cherny of The Age have reported that the Crows are showing a willingness to let them walk out of the club.

Schultz went undrafted as an 18-year-old but, after two impressive seasons in the VFL, was taken with pick 58 by Freo in 2018.

The youngster has since become a regular in Justin Longmuir's side, playing all but one game over the last two years.

Essendon are confident in retaining out-of-contract spearhead Jake Stringer past 2021, with Bombers football boss Josh Mahoney revealing talks between the two parties are  “a long way down the track”.

Reports across the past month have placed a wedge between Stringer and the club, with the 27-year-old understood to have baulked at the Bombers' latest extension offer.

However, speaking on SEN, Mahoney revealed that talks have continued to progress, with negotiations surpassing hurdles and nearing agreement.

The future of Fremantle Dockers big man Rory Lobb remains as an intriguing story, with recent reports linking him to a move interstate despite being contracted at the Dockers until the end of 2023.

It comes as Lobb, 28, has been reported to be relatively open about a potential move away from the Dockers, but talks are yet to commence with other clubs.

Western Bulldogs general manager of list and recruiting Sam Power has stated that the club is open to offers for their first-round draft pick at this year's draft.

According to AFL Media's Callum Twomey, the reason behind placing this first selection (currently pick-17) up for grabs is so that Power find the best avenue to making sure father-son gun Sam Darcy makes his way to the kennel.

Kelly yet to recommit to the Giants

Greater Western Sydney football manager Jason McCartney has claimed he hasn't lost any sleep about the fact that the club's star midfielder Josh Kelly has not signaled his intent to ink a new deal.

The Victorian reportedly has an eight year deal on the table with the Giants that would net the 26-year-old $1 million a season.

Lynch no certainty to remain with Adelaide

Injury ravaged Crows conduit Tom Lynch has reportedly been told that a new contract with the club may not eventuate in the city of churches.

In a report from David Zita and Max Laughton of Fox Footy, the former Saint is said to have been alerted to the fact by current coach Matthew Nicks.

A 'cashed up' Port Adelaide appear certain to bolster their list with ready made talent at this year's trade period, per a report from Simeon Thomas-Wilson of The Advertiser.

Following views that the Alberton club is light on for midfield talent, Power Chief Executive Matthew Richardson stated publicly this week that this supposed dearth was something that would be rectified this off-season.

Carlton and Richmond have been tipped as the leading suitors in the chase for out-of-contract Dockers gun Adam Cerra.

Cerra has been a highly-coveted target for a number of Victorian clubs, with The Herald Sun now reporting that the Blues and Tigers are in the front-seat should the midfielder opt for a return home.