As we head into the byes, a distinction between the contenders, the good teams and the rest of the pack is starting to become clearer.

After a lopsided round 11, three games will be played in round 12 between teams all occupying spots on the top eight, including an epic Queen’s birthday blockbuster between Collingwood and Melbourne.

The Eagles just keeping finding ways to win, which is the sign of a good team. After losing emerging star Jack Darling early in the piece against the Saints, Josh Kennedy seized control of West Coast’s forward line, booting six goals. Andrew Gaff is in Brownlow form too.

The Tigers flexed their muscles against the Bombers, kicking five goals to Essendon’s one in the first quarter to remind the league how dangerous they are when they’re on. Their pressure game was back to it’s suffocating best, while Josh Caddy may be the in-form forward of the competition, booting four goals to sit fifth in the Coleman Medal race.

Believe the hype, the Demons are absolutely sizzling right now with genuine match winners all over the ground. They boast arguably the best forward line in the game led by Jesse Hogan and Tom McDonald, and play a tough, defined brand of footy, the sort that wins finals.

The Swans have not done much wrong to drop a spot, they just haven’t been as imposing as the top three teams. Regardless, they would have the double chance if finals started tomorrow, and are going under the radar with more September experience than practically every side.

The Cats took the Suns to the cleaners at Metricon Stadium on the weekend, and you have to be impressed by how they keep backing up good performances each week with a young team. Perhaps not a flag contender right now, but are knocking on the door.

Say they have not beaten anyone, say they are untested, but it is about time Brad Scott’s troops started getting the respect they deserved. They’re top five players are currently as good as anyone’s in the competition, and the youngsters are coming along for the ride. The Roos are the real deal. 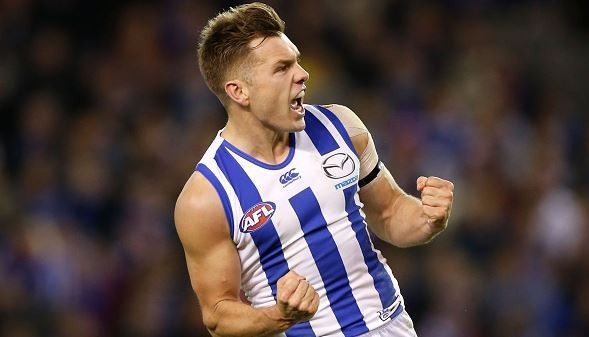 The Pies kicked their biggest score in two years against the Dockers, and probably should have won by a bit more. They have established an identity and are playing a consistent brand every week, led by arguably the AFL’s best midfield. Tom Phillips and Brodie Grundy are stars.

Still undermanned, the Crows were outworked by a spirited Giants team at Adelaide Oval. You can’t help but feel their best footy can beat anyone, and if they can get healthy through the byes, could charge into the second half of 2018.

Coming off their bye, the Power were sloppy against the Hawks down in Tassie, falling by three points after failing to get their high-power running game going at any stage. Just look a little bit off at the minute.

Finally discovering some heart, The Giants were brilliant in Adelaide, led by an unlikely hero in Zac Langdon, who booted three majors. It was the sort of win that could reinstall some confidence in the group and get their season back on track.

Yes the Hawks won and dropped a spot, but looked a shadow of the side we have seen dominate in Launceston so many times, kicking nine goals for the game. A few too many players down on form, while their youngsters aren’t bringing enough to the table.

You can forgive any side for getting pumped by the Tigers, and the Bombers were brought back to earth this week after a solid few weeks. Devon Smith could be the recruit of the season.

The Dogs fell victim to Melbourne’s uncompromising wrath on the weekend, but their problem has more to do with personnel than method right now. This is a young team that is learning how to play together again.

The Dockers were smacked by Collingwood at the MCG and don’t look capable of winning away from Perth at the present. Keep playing the kids Ross and trust the process, they’re building.

You had to feel for the Lions on the weekend, who were down to just one on the interchange in the second half. Credit where it’s due, they kept fighting. Dayne Beams worked tirelessly, racking up 32 disposals and bagging five goals.

The Saints have actually put together a solid couple of weeks. Playing against the two big dogs in successive weeks, Richmond and West Coast, they only lost by a combined 41 points, which is gallant for such a young side. The kids are showing a bit.

The Suns took a backwards step on the weekend, after being largely competitive for the whole season, they fell to the Cats by 85 points at home. Just not winning enough of the ball right now, and appear incapable of slowing down opposition midfielders. Dramas.

The Blues showed good fight on Friday night, and had they kicked straighter, we could have been talking about one of the upsets of the season. It’s hard to see them beating anyone right now, but Brendan Bolton is undoubtedly doing everything in his power to get this side back up.