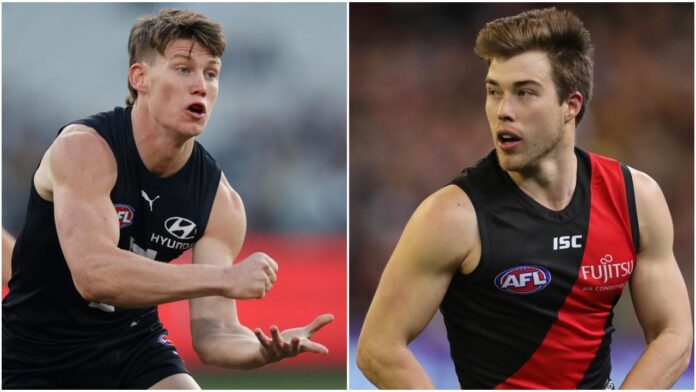 All-Australian selector Nick Riewoldt has opened up on the panel's selection for the 2021 side.

As most seasons do, the announcement of the side was followed by balanced celebration and outrage over those that did and didn't make the cut.

One area that has been persistent in receiving criticism is the two wing positions, which are often given to more inside, contested midfielders instead of pure wingers.

This year, Essendon star Zach Merrett and Blues onballer Sam Walsh were named on the wings as part of a star-studded midfield.

Despite Merrett and Walsh playing 4% and 11% time on the wings this season, the pair were awarded with a place on the outskirts of the All-Australian engine room.

The duo were perhaps chosen ahead of pure wingmen in Karl Amon, Paul Seedsman and Hugh McCluggage, with the trio argued to be better tailored to the All-Australian blazers for those places out wide.

When speaking on Triple M, Riewoldt spoke on the heated debate and the tough calls that needed to be made for the wing spots.

"This was a really interesting debate, and it was very robust," Riewoldt said. "Because the wing's a real position now.

"Probably 10 years ago you could have had this conversation around wingers and you would have said 'well they're all just midfielders'.

"But not really anymore, the wing plays a specific wing role and how do you stack up the guys that play on the wing?

"Have they had good enough years to supplant guys that have been just outstanding midfielders that really want to try and reward and get into the side?

"Without saying which side of the argument I was sitting on, I played wing late in my career I really respect the wing position."

When alluding to the aforementioned unlucky trio of Seedsman, McCluggage and Amon, Riewoldt said they were all a close chance of making the team.

"They were all in the squad. They were right in the conversation for those wing roles," he added.

The St Kilda great also went on to discuss how the panel proceeded throughout the 2021 season.

"There's meetings throughout the year where there's a bit of a watch list," he said.

"Who's performing really well? These are the guys that started in the elite bracket.

"You revisit it a couple times towards the end of the year and then obviously after the last game of the season.

"It's important to do it halfway through the season because you get to the end of the year and there's a real recency bias with some guys and some guys might have finished the season in unbelievable form.

"We almost sort of worked backwards at times with the guys that are absolute locks."

Riewoldt also explained how different members of the panel looked to cast their say in the side, stating "nothing really was was unanimous".

"Some of the selection panel fight really strongly for certain guys and other guys," Riewoldt explained.

"There's obviously an eye of the beholder sort of view taken on some of this stuff and how do you rate certain positions over other ones.

"Nothing really was was unanimous. There was always a bit of pushback, which is great."

The final All-Australian side was selected on Thursday night, with Demons skipper Max Gawn being named as captain of the 22-man team.

Gawn's teammates Clayton Oliver and Luke Jackson were also rewarded with individual honours on the night, as the pair took home the AFLCA Champion Player of the Year and NAB Rising Star awards respectively.