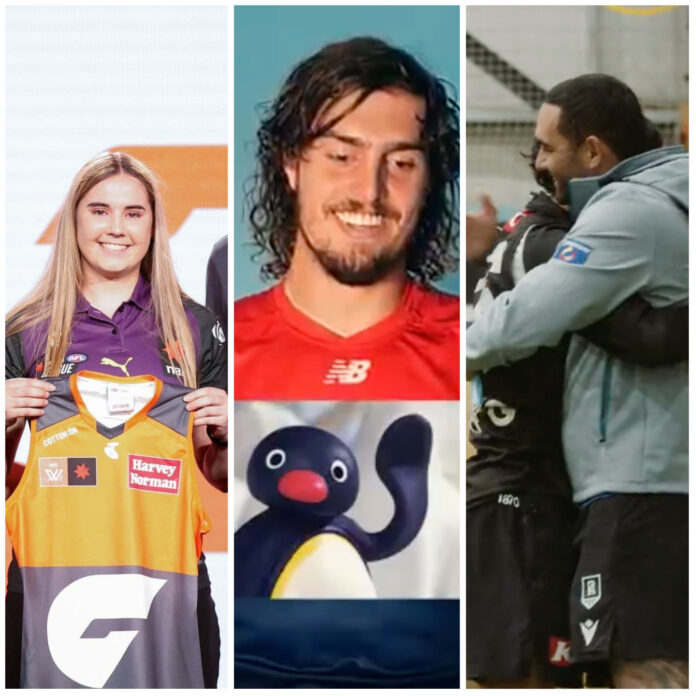 With the home and away season quickly approaching it's pointy end and things heating up on field, there's been plenty happening on the social side of things too.

We here at Zero Hanger have taken a look at some of the more funny, heartwarming, or just weird things to grace AFL social media circles this week.

Zarlie Goldsworthy definitely had a big Wednesday night, becoming a Giant with pick 20 in the 2022 AFLW draft. The young gun and former Matilda could barely contain her excitement at joining the club, which didn't seem to stop once the draft was done and dusted. Giants captain Alicia Eva sent out a tweet the following morning, revealing that the new Giant couldn't stop listening to the catchy GWS team song, a common issue.

Rumour has it… a brand new draftee may have had a small hotel noise complaint after playing the Big Big Sound on repeat. The little things 😂🧡 @GWSGIANTS

The AFL released their latest instalment of 'Name the 90's' this week, with some interesting answers coming from some of the competition's younger players.

When showed images of some '90s staples, like Mary-Kate and Ashley Olsen or a Discman, some seemed to struggle, while some of the league's older generation, like Patrick Dangerfield, could identify the items with ease.

Luke Jackson, while earning plenty of respect for his recent on-field exploits in the absence of Max Gawn, wouldn't have earned much praise from the '90s brigade for his guesses, but at least he was confident.

A heartwarming TikTok appeared online this week, showing a young player getting told she had made the AFL state team and ending in her very obvious excitement.

At time of writing, the TikTok is sitting at a cool one million likes and 6.2 million views, with GWS among many others in the comment section congratulating the young gun.

Jase Burgoyne is set to make his debut for the Power this weekend, the club his father Peter played 240 games at, and the club caught the moment it was announced by none other than his uncle Shaun.

Jase has impressed at SANFL level since being drafted from the club this year and now looks set to continue the Burgoyne name at the Power when he runs out on Sunday afternoon.

If you're going to watch one thing today, make it this 🥹

See the special moment Shaun Burgoyne tells his nephew, Jase, that it's his time to debut ❤️#weareportadelaide pic.twitter.com/ZX1qfornps