2017 was yet another dismal year for the Gold Coast Suns, finishing 17th on the ladder with a 6-16 record. It wasn’t bleak all year for the Suns, however, entering round 16 with a 6-8 record, including multiple wins over the Hawks and impressive victories against Geelong and West Coast. That’s where the joy ended, unfortunately, finishing the year off with eight consecutive losses and showing little competitive spirit throughout. Gary Ablett won the best and fairest from only 14 games, highlighting the talent issues the Suns possess.

2017 off the field was arguably even worse than their second-last ladder position, with turmoil following them past every corner. Rodney Eade stepped down as coach with three rounds to go, which resulted in three of the clubs worst performances of the year. Just in case you had forgotten, Gary Ablett’s future with the club was a hot topic all season and the media circus surrounding the two-time Brownlow medallist couldn’t have help the team’s performance on the field.

On a positive note, Jarryd Lyons proved an important recruit, Steven May and Tom Lynch gained invaluable experience as co-captains, Peter Wright began to flourish up forward and Jarrod Witts was superb as sole-ruckman.

The biggest move of the Suns’ off-season was the departure of four-time best and fairest Gary Ablett, who departed to the Cats. Another significant loss was that of dashing half-backman Adam Saad to the Bombers. Saad is only 23 and provided plenty of run out of defence for the Suns and will be sorely missed. Fringe players Brandon Matera, Matt Shaw and Trent McKenzie all found new homes.

Lachie Weller was welcomed from Fremantle in an exchange for the second pick in the National Draft and should be a regular in the Suns’ best 22 for the next decade. Aaron Young and Harrison Wigg joined Gold Coast from rival Adelaide clubs and are both a strong chance of senior action throughout 2018.

Stuart Dew was arguably their most important off-season pick up. While they might’ve paid overs to get Weller onto their list, that’s the unfortunate position that they find themselves and it’s Dew’s job to drag this scrapheap of a club into some sort of relevancy. The first nine rounds of the 2018 season are set to be some of the toughest weeks in club history, with Metricon Stadium unavailable due to the Commonwealth Games. The Suns don’t play a true home game until round 11, which may be too late after a potentially tumultuous start to the year. Rounds three and four pose one of the most difficult fortnights in football history, twice travelling to Optus Stadium in Perth to face the Dockers and Eagles after having to sell out a home game. 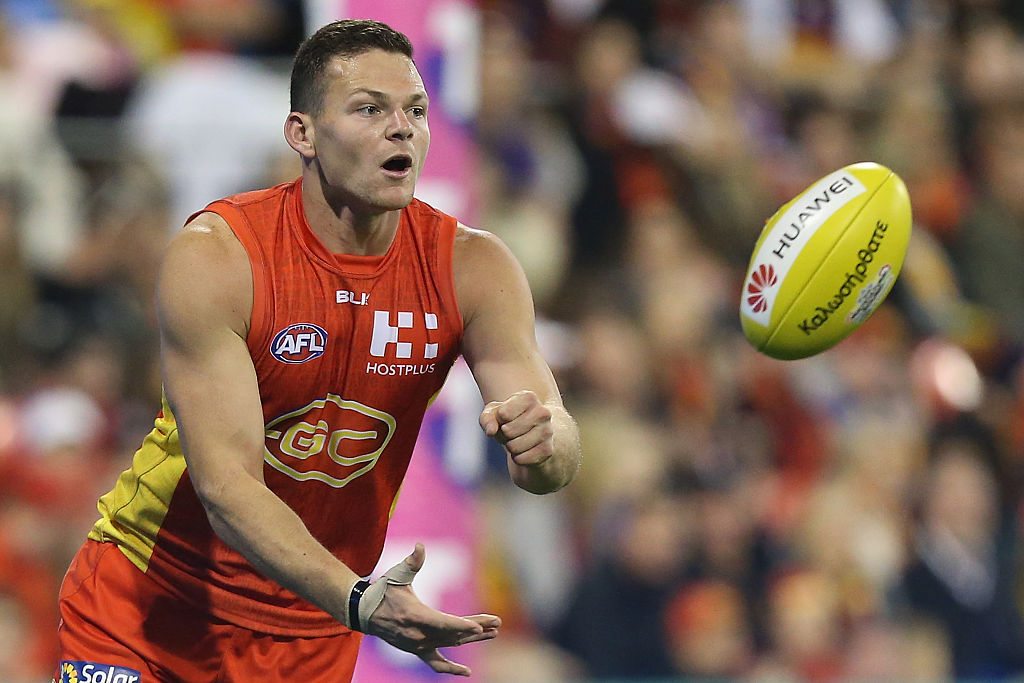 Gold Coast’s clear strength is their key position players, boasting a talented young spine that would be the envy of any AFL club. Steven May is a great leader of the backline and a quality tall defender with the ability to play on multiple types of forwards, Jarrod Witts enjoyed a breakthrough year in the ruck in 2017 and Tom Lynch and Peter Wright are stars up front. The halfback line also doesn’t lack in talent despite the loss of Saad, with the likes of Harbrow, Hanley, Weller and Kolodjashnij providing new coach Stuart Dew with plenty of options to rebound out of defence.

Elite ball-winners in the engine room is a clear weakness for Dew’s men, with Aaron Hall the only Suns midfielder not rated average or below according to Champion Data, who’ve ranked Gold Coast’s midfield group as the 16th best in the competition. Hall is extremely talented but is yet to consistently dominate at AFL, Jarryd Lyons and Michael Barlow are solid contributors, while David Swallow and Touk Miller will hope to improve in 2018. Another key weakness in the Suns setup is veteran leadership, lacking the experience and guidance that made clubs like Hawthorn so great over long periods of time. Lynch and May are relatively young captains, whilst senior players Michael Rischitelli, Michael Barlow and Matt Rosa have all missed significant portions of time with injuries. If the veterans can stay healthy in 2018, it’ll go a long way into having a competitive Suns outfit.

Richmond coach admits he’s given up on Rance return