Take a look back at some of the worst clash or pre-season jumpers in the AFL era.

5. The Kangaroos were clearly struggling for money when they agreed to sell their souls and wear this one-off orange and white guernsey to promote their sponsor at the time, Orange Mobile. This jumper worn by the Kangaroos was not only disgraceful for the bright orange colour, but also for the reason the Roos donned the jumper.

4. Collingwood wore this ridiculous pre-season jersey in 1996 and 97. It is far too busy and the magpie looks like something you would see talking in a children’s cartoon show, not to mention the stripes being uneven and oddly sized.

3. Take your pick of Fremantle jumpers that can be added to this list. Nearly every guernsey up until they changed their design to the three striped V a few years ago, was an eyesore. Admittedly, they didn’t have much to work with the red, green, purple and white colours. This jumper possibly takes the cake though. This away strip the Dockers wore in their first season in 1995 was never going to work. Bright green. I don’t think so, sorry.

2. I’m not sure what West Coast was thinking with this strange fluorescent number that the Eagles wore from 2000 – 2002. It looked more like someone had spilt a paddle pop rainbow ice-cream than anything that should be seen on a football jumper. This abomination of a guernsey clearly didn’t do enough to distract their opponents, however, with the Eagles finishing 13th, 14th and 8th the three years it was worn. 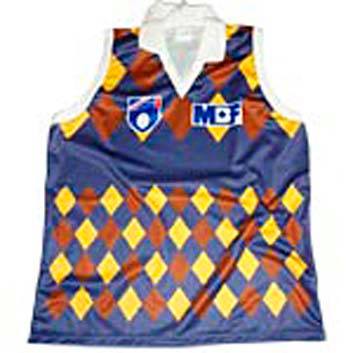 1. To honour the inspiration for this article, Hawthorn take the cake with this 1995 pre-season Guernsey. This bizarre diamond inspired number, was thankfully only worn once, in a match against the Sydney Swans.

Hawthorn wore the below clash strip against GWS earlier this year and their opponents made sure the Hawks knew how ridiculous the Giants thought their jersey was with this brilliant reply to a tweet: