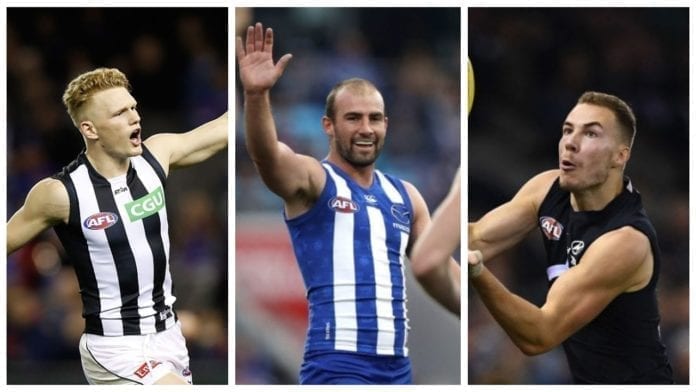 Team News: Carlton will be forced to make at least one change in their upcoming match against St Kilda as Blues young gun Jack Silvagni suffered a fractured rib and a bruised lung in their win against Essendon last week.

It means that it could pave the way for Zac Fisher to come in after he showed what the is capable of in practice match on the weekend, bagging two goals.

Carlton could also be bolstered by the return of Harry McKay who missed last weeks match due to soreness.

Meanwhile, the Saints will have a vacant wing position available as Zak Jones is in doubt over a hamstring injury.

Many Saints players are lining up for the spot such as Jake Sinclair and Nick Hind, the Saints could also welcome back Jade Gresham to the mix.

Prediction: Both sides have shown what they are capable of and could be a gritty affair. St Kilda 15.

Team News: Collingwood face a few months without Jeremy Howe, who ruptured his PCL, opening a spot in the backline.

Steele Sidebottom and Lynden Dunn have also added some worries to Nathan Buckley’s selection dilemma as both breached COVID protocols.

It looks like Adam Treloar could come back into the fold after impressing in a practice match over the weekend, while Jack Madgen could replace Howe.

Essendon will be without Zach Merritt after he was suspended for one week, but the Bombers seem to have enough depth to cover the vacant position.

Conor McKenna could come back after he ended his quarantine period and can be selected again, while Matt Guelfi could also be welcomed back into the side for the wing position. Former Kangaroo Mitch Hibberd will make his debut.

Prediction: Both are eager to bounce back after suffering nail-biting losses. Collingwood by 15.

Team News: The Eagles will be without Will Schofield after he was suspended for headbutting Port Adelaide’s Zac Butters.

Jeremey McGovern looks set to come back in despite his ankle problems, while Nathan Vardy, Oscar Allan and Bailey Williams are all in contention for the ruck spot.

While the Swans are without their first-choice ruckman Sam Naismith (knee) for the season, they could welcome back Tom McCartin if he is passed fit to play after recovering from a concussion

Other players that are pushing for selection are Ryan Clarke  Dylan Stephens, Will Gould and Chad Warner.

Prediction: Eagles to find some form. Eagles by 10.

Team News: Geelong could welcome back Harry Taylor to the fold after the veteran defender was managed in their nail-biting win over Melbourne on Sunday. He could come in for the injured Tom Stewart who had surgery on his collarbone.

The Cats will also be without Tom Atkins who also suffered an injury in the three-point win over Melbourne, bruising his ribs.

Jordan Clark is pushing his case after a stellar performance in a practice match, while  Quinton Narkle and Lachie Fogarty could fit Atkins role.

The Suns have been impressive since the restart, climbing up to second spot on the ladder. They got through their 13 point win over Fremantle on the weekend unscathed.

The Suns seem to have the recipe for the shorter quarters so it will be interesting to see what they do at the selection table. Brayden Fiorini, Josh Corbett, Sean Lemmens, Izak Rankine, Sam Flanders and Peter Wright are all knocking on the door.

Prediction: Cats too good at home. Geelong by 25.

Team News: Western Bulldogs will have to at least be forced to make two changes as they will be without Aaron Naughton (ankle syndesmosis) and Sam Lloyd (broken collarbone) for the foreseeable future.

It could pave the way for debutant in waiting, Cody Weightman, while Lewis Young and Josh Schache are looking to fill Naughton’s spot.

Other players that could come in include Tory Dickson, Easten Wood and Lin Jong.

North Melbourne have problems of their own, as they are likely to be without their skipper Jack Ziebell, who was seen on the bench with ice around his hamstring in their four-point loss to Hawthorn last week.

All eyes will be on Ben Cunnington, who has missed the last two games due to a back impingement, so much would depend on the fitness test outcome.

Jamie Macmillan is looking to come back into the side, as is Majak Daw Tom Murphy, Aiden Bonar and Bailey Scott.

Prediction: The Bulldogs moved the ball around well last week in their win against Sydney. Western Bulldogs by 6.

Team News: The Lions will be without skipper Dayne Zorko for multiple weeks after scans showed he suffered a calf strain.

All roads lead to Tom Berry coming into the fold which would make an ideal replacement for Zorko.

The Lions could also welcome back ruckman Stefan Martin depending on how well he gets through main training.

It will be interesting to see what they do with their forward line as Keidean Coleman, Rhys Mathieson or Allen Christensen could all come in and play a small forward role.

Other players looking to get a look in include Noah Answerth, Alex Witherden or Mitch Hinge.

Meanwhile, it’s happy days for Port Adelaide, who are undefeated on the top of the ladder with a healthy list.

Ryan Burton is likely still a few weeks away due to a sprained knee. Same goes Xavier Duursma.

Prediction: Both teams have been really impressive and this could go either way. Lions by 15.

Team News: The Crows could welcome back Mat Crouch who was a surprise omission from last week’s match against the Lions.

Paul Seedsman, Kyle Hartigan and David Mackay all impressed with their showing in the practice match.

Will Hamill could miss this week after suffering a concussion in last week’s defeat to the Lions.

Fremantle will be without Nat Fyfe for one to two weeks after he suffered a hamstring injury in their loss to the Gold Coast Suns.

They could either bring in ruckman Sean Darcy, youngster Sam Sturt or midfielder Blake Acres, who could finally debut for the club.

Prediction: Don’t expect to see fast-flowing footy as both these clubs are 17th and 18th on the ladder. It is more of a case of who take their chances better. Fremantle by 10.

Team News: The Demons could welcome back a host of players as they look to put in a better performance against the Tigers this week.

Melbourne reported injuries from their three-point loss against Geelong, but could welcome back Harley Bennell, who bagged four goals in a practice match. Oscar Mcdonald is also in the selection frame.

Mitch Brown and Sam Weideman could also be in the frame depending on what Simon Goodwin’s plans are for the forward line.

Richmond are forced to make one change as David Astbury went under the knife to have knee surgery.

It could see either Noah Balta or Ryan Garthwaite take his spot. Jack Graham, Marlion Pickett, Daniel Rioli and Pat Naish all impressed in the practice match in a bid to get selected.

Prediction: The Tigers should be too strong. Richmond by 25.

Much will depend on if Phil Davies can overcome his hamstring problem too, while Jye Caldwell and Daniel Lloyd could also be in the frame to come back.

The Hawks will be without Luke Breust but could welcome back Jon Patton.

Paul Puopolo is also in contention after being named emergency in last week’s game.

Prediction: Both teams won close games last, so could we be in for another one? GWS by 20.