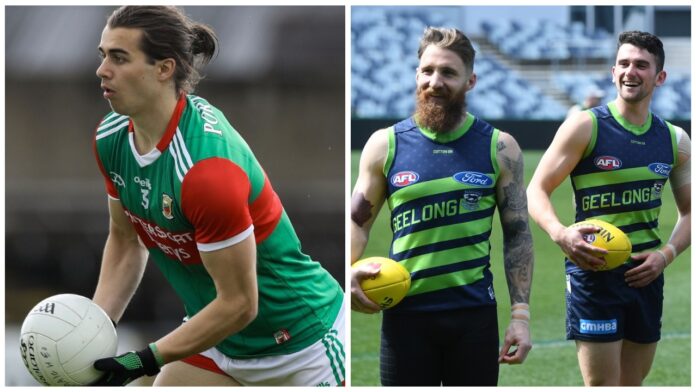 Geelong has secured the services of Gaelic star Oisín Mullin who has inked a two-year deal as category B rookie.

Mullin will follow in the footsteps of fellow Irish footballers, and soon-to-be Geelong teammates, Mark O'Connor and Zach Tuohy who both made the transition to Australian Rules Football after moving from the Emerald Isle.

Irish all-star commits ☘️✍️ The 2020 @officialgaa Young Player of the Year is coming to Geelong.

The Cats announced the news of signing Mullin on Thursday, with Geelong’s recruiting and list manager Stephen Wells telling geelongcats.com.au that the 21-year old defender is an "athletic" and "talented prospect".

"We are thrilled he has chosen to join the Cats as he transitions to AFL,” Wells said.

Hailing from Mayo on the west coast of Ireland, Mullin will make the move to Melbourne with an impressive footy resume.

Last year he earned GAA Young Footballer of the year and has been nominated for the award selection this year too after playing two consecutive years in the All Ireland final.

“Oisin has already established himself as an elite player in the GAA, and it is a big step to make the move to Australia. We have a strong plan in place around his development and transition to football,” Wells added.

Geelong's Irish mid-fielder Mark O'Connor said he is looking forward to the prospect of playing alongside the young talent and told Radio Kerry that Mullin was a "very impressive player" and remembered "watching him in the All-Ireland final of last year."

"He was a very impressive player. We'd be more than happy to see him out there. We'd wish him all the best obviously," O'Connor said.