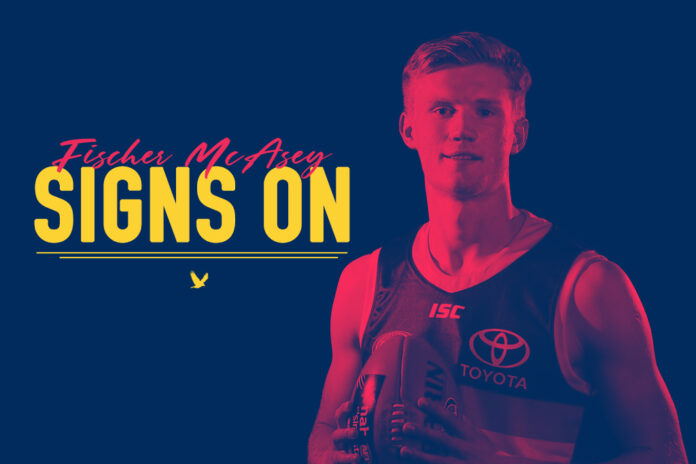 Adelaide Crows youngster Fischer McAsey has penned a new two-year deal to remain at Wests Lakes until the end of 2023 season.

The versatile tall has been closely monitored by keen Victorian suitors in the past and has now pledged his allegiance to Adelaide.

The 20-year-old was reported to be on the radar of several Melbourne clubs as opportunities in the Crows' defence looked limited for the former Pick 6.

“He’s had an interrupted pre-season but there are some Melbourne clubs that are already asking about him,” Fox Footy's Jon Ralph reported last month.

McAsey is currently in his second season with the Crows and is yet to feature this year, but is tipped to be in the frame for selection for the club's Round 7 clash with Greater Western Sydney this weekend.

After the club announced his new deal on Thursday, McAsey stated his delight in locking away his future with the Crows.

“I’m excited by what we’re building at Adelaide and I can see the direction we are heading,” McAsey said.

“My faith in the Club has never wavered and I have enjoyed settling into Adelaide over the first two years.

“I want to be part of it and I believe the coaches we have will enable me to get the best out of myself.

“We have a great group of young players who are coming through together and we are driving each other to get better every day, so I am really pleased to be here for another two years.”

Stick or Twist? The AFL clubs that should consider captaincy changes...