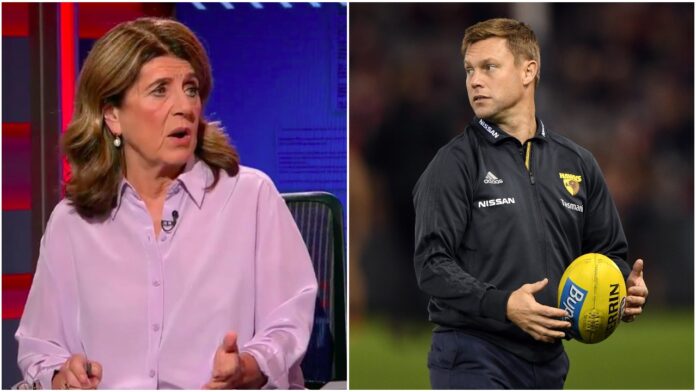 The Hawks recently committed to a two-year coaching roll-over between four-time premiership coach Alastair Clarkson and ex-captain Sam Mitchell which will see the latter take the reigns of the club from 2023 onwards.

Wilson has maintained that the pair's relationship has deteriorated, with Mitchell keen to take over from the beginning of next season whilst Clarkson wishes to stick with the initial strategy.

The veteran journo also maintains that a mediation session between the pair has left even more questions than answers, with those in attendance stating that it was clear that Mitchell did not want Clarkson at the helm come next season.

When questioned over those comments on Monday night's airing of Footy Classified, Wilson re-affirmed her stance over the coaching controversy.

"I absolutely stand by what I said."

“I absolutely stand by what I said,” Wilson said on Footy Classified.

“They sat down and thrashed things out and they disagreed on strategy, they disagreed on coaching philosophies, they disagreed on list management, they tried to work out how it was going to work and it was made clear to others in the meeting that Sam Mitchell would prefer to have the major say on all of those things and be the senior coach next year."

Prior to committing to the Hawks job, Sam Mitchell was linked heavily with the vacant Collingwood coaching position, but elected to stay at Waverley Park with the club whom he won four flags with.

With this recent controversy, many are tipping Alastair Clarkson to leave Hawthorn for another Melbourne side, with the Pies and Blues being possible destinations.

However, Wilson has refuted such talk and is convinced he will stay for the time being.

“I don’t think he’ll go to Collingwood. I think Carlton are definitely still interested in him and if he did change what he said on Friday, people would judge him, however I’m more leaning now that he’s more likely to stay," she said.

The Hawks have been in good form over the past month, drawing against the Demons in a belter of an encounter, as well as beating the Giants.

However a disappointing loss to the Crows on Sunday has meant they are equal bottom with North Melbourne, only holding onto 17th by percentage.

Their next encounter comes against the Lions in Tasmania, and the side will be hoping to replicate their performance against Melbourne when they face Chris Fagan's side.