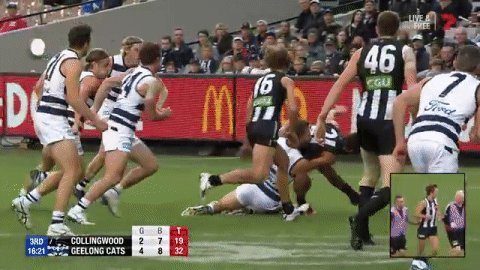 Collingwood midfielder Tom Phillips was left groggy after converting an important goal for the Magpies.

Phillips kicked the goal as he was being tackled, his head colliding with Chris Mayne’s knee.

Tom Phillips somehow squirted this through the big sticks, but caught Chris Mayne’s knee on the way through.#AFLPiesCats pic.twitter.com/1x2qxYqjnV

Phillips will not take further part of the game after he was taken from the field after the incident.

The Pies also lost Darcy Moore to a hamstring injury earlier in the contest.