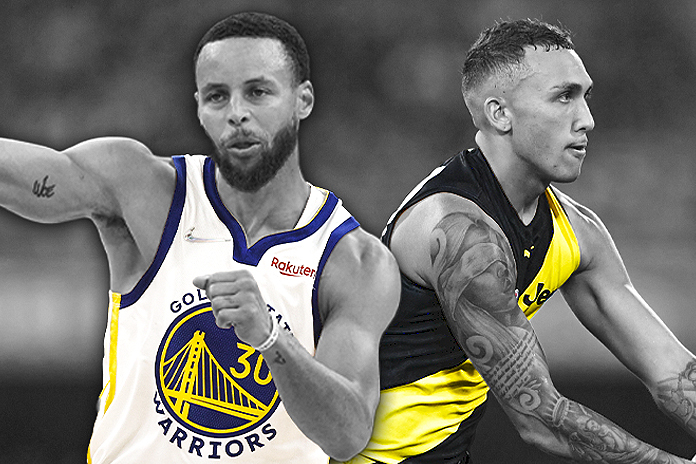 The recently-completed NBA season finished with the cementing of a dynasty for the ages.

Steph Curry, Klay Thompson and Draymond Green assured themselves the status of one of basketball’s best ever ‘Big Threes’.

Admittedly, comparing American and Australian sports can sometimes be a cringeworthy exercise, but the Warriors’ incredible achievement bore an eerie resemblance to what Richmond are trying to achieve in the AFL this year.

For starters, each team has a transcendent generational talent in Curry and Dustin Martin, respectively.

And after winning three premierships in four years, the Tigers slipped out of contention last year, just like the Warriors had done in their previous two seasons prior to climbing the mountain again this year.

Like the Tigers in 2021, the Warriors were hit hard by injuries, and even registered the worst win-loss record in the NBA in 2020.

But Golden State’s three-time championship core returned to full fitness at the right time this season, and Curry, Thompson and Green guided them to the promised land yet again, with the help of a refurbished support cast featuring the likes of Andrew Wiggins, Jordan Poole, Gary Payton II and Otto Porter Jr.

Again, the similarities with Richmond are there for all to see.

The Tigers’ triple premiership core is back up and running again this year as well.

And like the Warriors, they have an army of effective soldiers providing valuable assistance, such as Liam Baker, Shai Bolton, Tom Lynch, Jayden Short, Jack Graham, Kamdyn McIntosh, Marlion Pickett, Robbie Tarrant, Noah Balta and Josh Gibcus, the vast majority of whom have also tasted premiership success with Richmond.

After starting the season 2-4, Richmond have slowly but surely been building momentum, and with six wins from their last seven games, they sit in sixth spot with an 8-5 record, just a game outside fourth position, which is currently occupied by their next opponent Geelong.

Reigning premiers Melbourne might have sent an ominous reminder to the rest of the competition on Thursday night that they are far from a spent force, as they destroyed fellow flag fancies Brisbane by 64 points, but Richmond will keep plugging away, quietly confident they can pull off a ‘Golden State’ by winning a fourth flag.

A major indicator that suggests the Tigers are neck deep in the premiership race this year is the return of their devastating turnover game, which was central to their golden run between 2017-2020.

They are numbers that are certain to set off alarm bells in the coaches’ boxes of each of their 17 opponents.

The Richmond story isn’t exactly the same as Golden State’s, after all the Tigers only experienced one bout of finals heartache when the Mason Cox-inspired Magpies stunned them in the 2018 preliminary final. The Warriors, on the other hand, lost two finals series to Cleveland (2016) and Toronto (2019).

But if the Tigers manage to pinch a fourth flag in six seasons this year, after overcoming a lengthy injury list in 2021 and being written off as a legitimate contender, they will rightly go down as one of the greatest teams in VFL/AFL history like the Warriors in the NBA.