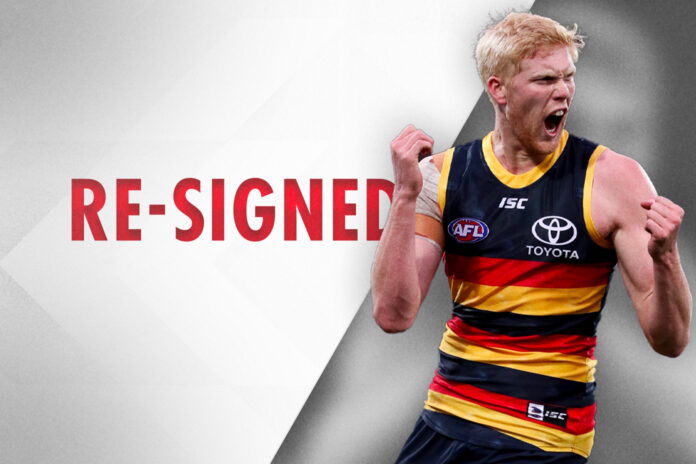 Adelaide has bolstered their stock of young talls ahead of the off-season after securing the signature of versatile forward-cum-ruck, Elliott Himmelberg.

The 24-year-old's fresh two-year extension will see him call West Lakes home until the cessation of the 2024 season.

Having missed the vast majority of the 2021 season after sustaining a shoulder injury that eventually required surgery, the Wagga Wagga product has bounced back with aplomb, producing seasonal means of 3.1 marks per week and beyond 1.2 goals a game.

Speaking with the Crows' media department, Himmelberg professed his excitement about the ability to remain a part of Matthew Nicks' murder.

"With the young group we have coming through together and the coaches working with us on a daily basis this is the perfect place to keep improving my game,” the mustachioed big man expressed.

"The last couple of seasons have been challenging with my body but I'm looking forward to getting a full pre-season under my belt and improve on the football I have played this year.

"I'm excited to be here for the next few years and hopefully we keep improving together.”

With a pair of four-goal bags sewn up so far this season, Himmelberg has proven a serviceable avenue to goal alongside the ilk of Taylor Walker, Riley Thilthorpe and Darcy Forgaty, as well as the Crows' fleet of small forwards in Shane McAdam, Josh Rachele, Lachlan Murphy, Ned McHenry and James Rowe.

Add in the 200cm prospect's ability to lend a hand at centre bounces, and Himmelberg's value has not been lost on Adelaide's list manager, Justin Reid.

“Elliott has made great progress this season and we’ve seen the type of player he can become,” Reid stated.

“His size and versatility make him a difficult match-up both inside 50m and in the ruck.

“Coming off a shoulder reconstruction at the end of last season it’s a real credit to him for the work he put in to recover from the surgery and perform at AFL level.

“His four goals in the Showdown win in Round 3 was a standout and he’s been a consistent performer at SANFL level as well which gives us great confidence for what he’s capable of in the future.”

Himmelberg has donned the Crows' famous tri-colours on 38 occasions since joining the club with the 51st pick of the 2016 National Draft.