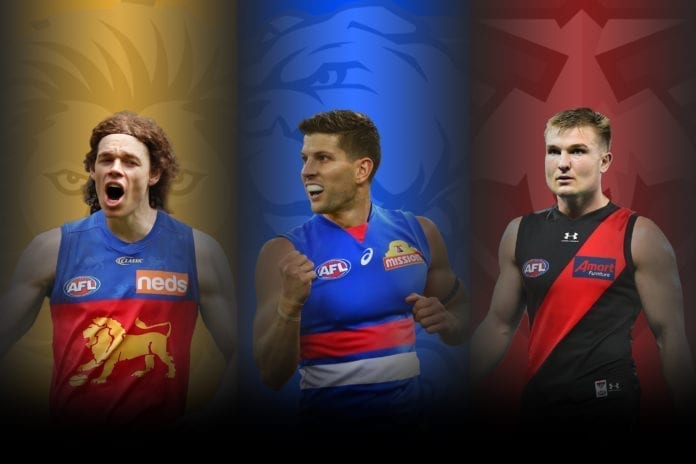 While the finals race is heating up, there’s already plenty of attention towards the upcoming trade period.

With financial cuts looming and players demanding more trades than ever before, there’s no reason to believe this upcoming off-season won’t be as wild and unpredictable as the season proper.

So, then – how about 10 massive trades we’d like to see to get the ball rolling?

Ben Brown and North Melbourne have had an absolute shocker of a year. But that means his trade value has never been lower – let’s not forget this is a guy who has kicked 60 goals three seasons in a row before this horror campaign.

If Brown can recapture his 60-goal a season form he is just the straight-kicking assassin the Lions need If Brisbane don’t want to give up picks, could they dangle Eric Hipwood or Daniel McStay? They have two first round picks, with one tied to Port Adelaide.

MELBOURNE, AUSTRALIA – AUGUST 17: Ben Brown of the Kangaroos celebrates kicking a goal during the round 22 AFL match between the North Melbourne Kangaroos and the Port Adelaide Power at Marvel Stadium on August 17, 2019 in Melbourne, Australia. (Photo by Quinn Rooney/Getty Images)
BackNext