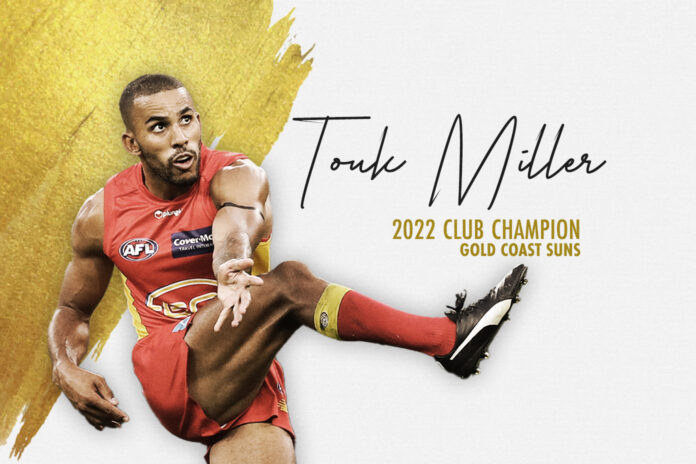 Gold Coast Suns captain Touk Miller has topped off an outstanding season with his second consecutive Club Champion Award, with the midfielder rounding out the leaderboard on 566 votes.

Also on the night he also picked up the Player's Player Award. Miller was also given life membership at the club alongside former skipper Gary Ablett.

Noah Anderson finished second in the count with 504 votes, and David Swallow finished third with 479 votes.

Anderson was also named as the 'Emerging Player', Ben Ainsworth named as the Most Professional Player and former Richmond forward Mabior Chol was crowned as the leading goal kicker.

Miller was also crowned the AFL Coaches’ Champion Player of the Year alongside Melbourne premiership midfielder Clayton Oliver and was named in the 2022 AFL All-Australian Team on the wing. This makes him a dual All Australian recipient after making the 2021 team last year on the bench.

Many experts also have the midfielder polling very well in the Brownlow Medal count, with the star midfielder averaging 29 disposals, 6 tackles, 8 clearances and 110 fantasy points per game in 2022.

The 26-year-old also was awarded his third Marcus Ashcroft Medal in Round 19.

The midfield bull has been a big part of the Suns' rise up the ladder and has stamped his authority on the game as one of its elite midfielders.

Named as co-captain this season alongside Jarrod Witts, he has led from the front both on and off the field. The skipper has notably been very outspoken against players who have chosen to leave the club such as Tom Lynch and Izak Rankine, with Lynch leaving at the end of the 2018 season and Rankine having just announced he will be leaving the suns to explore new opportunities in 2023.