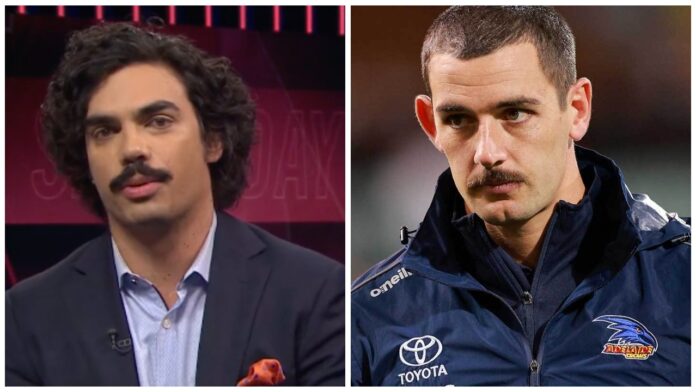 Former Sydney, Adelaide and Collingwood player Tony Armstrong has delivered a strong response in the wake of Taylor Walker's suspension for using a racial slur.

Walker has been suspended for six games and has been slapped with a $20,000 fine, which he will donate to an Aboriginal and Torres Straight Islander program and undergo educational programs.

"It's so so so disappointing and to be quite frank we're all pretty angry"@Tonaaayy_ shares his perspective on Taylor Walker's ban for a racist slur. pic.twitter.com/A8713JYGUU

Walker made the slur toward North Adelaide’s Robbie Young during a SANFL match and was overheard by an Adelaide club official who reported the incident to the club.

Armstrong has built a profile in the media in recent years and was on Fox Footy when he spoke about the impact these kind of incidents have in this day and age.

Walker and Armstrong shared a locker room for two seasons in 2010 and 2011 and Armstrong said that Walker's comments hurt him personally and that being a friend of Walker's made this incident hurt even more.

“I’ve known Tex for the past part of 16 or 17 years. When you’ve got a friend who you’ve been close with that long, and it comes out that he said something like that, that really hurts being a black fella,” Armstrong said.

An emotional Matthew Nicks reflected on playing alongside great Indigenous athletes in the wake of Crow Taylor Walker's ban for a racist slur. pic.twitter.com/jaBHP1Rjpd

“It’s really hard to reconcile with that on a personal level.”

Much has been made of the punishment received by Walker with many comparing it to past occurrences. Former Western Bulldog Justin Sherman was given four weeks after he racially abused former Gold Coast Sun Joel Wilkinson in 2011.

Sherman played VFL in those weeks out and was fined $5,000.

Armstrong suggested the punishment should be more severe.

He went on to say that the punishment given wasn't too dissimilar to that given to Peter Everitt in 1999.

“I think about the AFL and where it’s at. Twenty-three years ago Spider Everitt for a racial slur (received a) $20,000 fine and a four-week ban,” he said.

How far has the @AFL really progressed in 22 years?#AFL #AFLCrowsPower

“Yet we still say that we’re coming down so much harder and we’ve come so, so much further since then.

“That’s 23 years and the only difference is two weeks in games. The AFL and everyone in the peak rule needed to come down a fair bit harder.”

Armstrong went on to say that the incident has caused a lot of harm for the indigenous community.

“I’ve been second guessing walking into rooms. I’m playing situations back over my head, I’m in a text group with a lot of Indigenous players, it’s just been hopping off about how we feel,” he said.

“It’s been a really crappy 36 hours for all Indigenous people and it continues to happen over and over again.

“We always have to — with a smile on our face — be the ones who take the higher ground, not be angry, be the ones to put the olive branch out and educate.

“There’s no place where there’s more education than the AFL, Indigenous people over index in the AFL.

“There’s enough there for people to know better and it’s so, so, so, disappointing and to be quite frank we’re all pretty angry.”